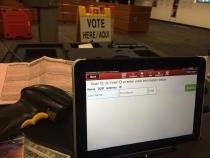 (Photo by Jude Joffe-Block - KJZZ)
An e-pollbook is seen at a Maricopa County poll worker training in August.

Two experts contracted to analyze Maricopa County voting plans in the wake of long lines at polling sites in March, are predicting some voters could see long lines again on Election Day.

But a spokeswoman for the Maricopa County Recorder's Office said her office is confident the vast majority of voters will spend less than 30 minutes in line.

The chief concern among these experts is that the county does not have enough of the electronic tablets preloaded with voters’ names, known as e-pollbooks. They allow poll workers to check-in voters quickly, and dictate how many check-in lines there can be at each polling place.

After some voters had to wait more than five hours to vote during the Presidential Preference Election in March, the Democratic National Committee and the Arizona Democratic Party sued. In September, the parties reached a settlement.

The settlement requires the county to have a goal of fewer than 5 percent of voters waiting in line for 30 minutes in all future elections. It also said county officials will utilize an expert report written by a computer science professor when deciding how to allocate e-pollbooks to different polling sites in the county.

The settlement states “the county election officials agree to consider the experts’ advice in good faith.”

In October, Buell and Yang co-authored  additional recommendations to the county in a supplementary memo. They raised concerns about how the county planned to allocate e-pollbooks.

In the memo, the experts said their simulations indicate 1,900 e-pollbooks are necessary to meet the goals for short lines, but the county only owns 1,800 — and plans to deploy even fewer than that.

“Our simulation shows that with only 1,680 e-pollbooks deployed, if turnout is the same as in 2012, in some precincts nearly 40 percent of all voters will wait in line more than 30 minutes to vote on Election Day,” the report by Buell and Yang reads. That would mean over 32,000 voters, or 7 percent of all county voters, would wait in line for more than 30 minutes, according to the experts’ calculations. About 1 percent of voters, or about 6,000 voters, would wait more than 50 minutes to vote.

Those predictions exceed the goal of only 5 percent of voters in line for 30 minutes.

The experts suggested if county election officials cannot purchase more e-pollbooks, they should allocate them more efficiently. For example, the experts said polling sites with the fewest expected voters should only get only one e-pollbook, so that busier sites could have more.

The experts’ predictions assumed the percentage of voters who turnout on Election Day will be the same as it was in 2012, and that 1,680 e-pollbooks would be deployed on Nov. 8. But the Maricopa County Recorder's office told KJZZ it is predicting turnout to rise from 23.7 percent of registered voters four years ago to 25 percent this year. Plus, county elections officials only plan to deploy 1,650 e-pollbooks — suggesting lines could be longer than the experts’ simulation.

Maricopa County Recorder's Office spokeswoman Elizabeth Bartholomew said her office was confident in its plan and said they anticipated meeting the goal of fewer than 5 percent of voters in line for more than 30 minutes. She said her office owns 1,800 e-pollbooks, and it is too late to meet the recommendation of 1,900.

“We will be sending out 1,650 [e-pollbooks] because we feel every single troubleshooter needs to have one extra e-pollbook with them at all times in case one of their polling places they are responsible for isn’t working,” Bartholomew said.

Bartholomew said additional spares will be stored at Phoenix and Mesa offices in case other e-pollbooks need to be swapped out. She said her office wants to send a minimum of two e-pollbooks to every polling site in case one fails.

But Democrats say at they want to see all the e-pollbooks deployed to polling sites.

“We have real concerns about Maricopa County's e-pollbook allocation plan,” said Spencer Scharff, the director of voter protection for the Arizona Democratic Party. “The county's own expert believes that their current plan does not appropriately consider expected Election Day turnout, and advised them to either reallocate their e-pollbooks or deploy additional e-pollbooks.”

Bartholomew said her office’s duty under the settlement “was simply that we would take these recommendations from the election experts into consideration, and we absolutely have, and we have gone through them, we have read them all.”

Bartholomew said lots of voters have already voted early which will alleviate crowds on Nov. 8.

“I think our plan is going to be successful,” Bartholomew said. “And we are still hoping for the best that 30 minutes is the maximum that voters are going to have to wait in line for this election.”

Meanwhile early in-person voting is going on this week for voters who wants to cast their ballots before Election Day.