Election Unique For Millennials, Will Be 1st Time They're All Eligible To Vote 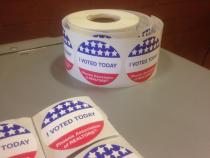 This election season there has been a lot of attention given to the two major party candidates. But this year, the election is just as much about who is on the ballot as who is casting them. Nov. 8 will mark the first major election where all millennials in the country are eligible by age to vote.

They’re a group with increasing influence. In Arizona alone more than 77,000 new voters between the ages of 19 and 35 have registered to vote since late August. While there are more youth voters up for grabs than ever before, there are also more undecided voters.

University of Nevada, Las Vegas student Ember Smith says this is because neither party can seem to pinpoint what young voters want.

“The second debate really showed all the drama that is in this election, Smith said, “But I really would like to see more policy from both the candidates.”

This election has lit a newfound sense of political efficacy amongst many young voters making them one of the most flexible groups. They are a target group that neither party can seem to wrap their arms around. However, Smith says what she wants from a candidate isn't so different from what the rest of America is looking for.

“I’d like to see more policy, and I think there’s a huge separation in policy between the two of candidates.” But despite the disparity in policy Smith says, “Between the two candidates, I think Hillary Clinton has the experience and capability  to interact rationally with other leaders.”

“I like Trump because he’s going to be the one to fix the economy.” Thompson says. “ I want the economy to be in good standing so I don't have to pay off debts that other presidents have made or our county’s made in the past.”

The political force of millennials is now equal to that of the baby boomers, according to a recent study done by the PEW Research Center. Both generational groups each make up nearly 31 percent of the overall electorate.

Millennials have statistically represented the lowest voter turnout in comparison to all other age groups. In 2014, only 46 percent voted of millennials in the last presidential election when compared with the 72 percent of Silent Generation voters who historically turn out in droves.

But, this election is unique for millennials — it marks the first time essentially that all the millennials in the country are old enough to vote.