Download mp3 (5.89 MB)
(Photo by Kathy Ritchie - KJZZ)
Luann Thoma-Holec is the owner of Thoma-Holec Designs studied gerontology at ASU. She says she wanted to understand the challenges that someone who has Alzheimer's disease or another dementia faces in daily life. 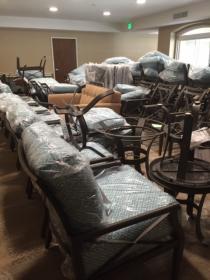 (Photo by Kathy Ritchie - KJZZ)
Movers brought in patio furniture that will eventually be placed on the veranda. Thoma-Holec says everything is custom ordered to ensure residents can safely access the seating throughout the community. 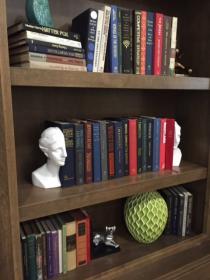 (Photo by Kathy Ritchie - KJZZ)
Thoma-Holec and her team even choose the books that line the shelves in the second story quiet room. She says in other communities, she has seen residents adopt the Dewey Decimal System to help organize the books and check them out to others. 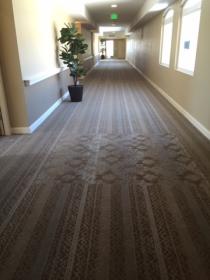 (Photo by Kathy Ritchie - KJZZ)
Thoma-Holec says she and her designers never go beyond an 80 percent change in color, brightness or shade because if a resident has a memory impairment they may perceive a drastic change as a hole or height change. 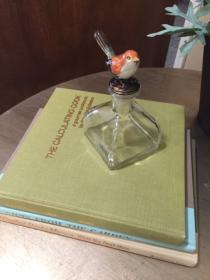 (Photo by Kathy Ritchie - KJZZ)
Even the tiniest of details, like this glass perfume bottle, are chosen by Thoma-Holec and her team of designers. 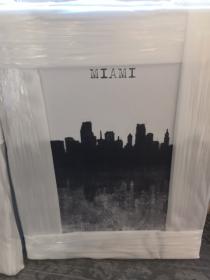 (Photo by Kathy Ritchie - KJZZ)
Thoma-Holec believes art makes the space. Art will line many of the corridors, and in some cases is used by residents to identify their room.

There are nearly 150 senior housing communities in Maricopa and Pinal counties, according to a report by the National Investment Center for Seniors Housing & Care. That translates to around 23,000 units. Senior housing is a growing industry in the Valley. And a lot goes into not only the development of a community, but also the look and feel.

"This is a studio apartment, it has everything you’d have in your own home. A nice stainless-steel refrigerator and a quartz countertop," explained LuAnn Thoma-Holec, owner of Thoma-Holec Designs in Mesa. "We make sure the shower unit is easily accessible, that no one is going to trip getting in and out of the shower or slip."

But this isn’t your typical studio apartment.

Thoma-Holec describes her company as a senior-centric design firm, meaning they only do senior housing, like this one here in Fountain Hills. It’s an already warm August morning and crews are carrying in furniture, while designers are reviewing plans to figure out what goes where.

Thoma-Holec said it’s taken two and a half years to get here, and this project is just one of 47 that she and her team are working on nationwide.

"When we design it’s a combination of healthcare-hospitality," Thoma-Holec said.

So there’s a cafe, a restaurant, a theater room and a beauty salon. In other words, explained Thoma-Holec, "all the amenities that help them to socialize, but then it still has to feel like home in certain areas and be comfortable for the residents."

Which means everything is custom ordered for the client, she said. Like the wing chairs used in several seating areas.

"Everything has to have arms and certain arm height so a resident can get in and out of the chair easily, and we do our cushions extremely hard. To us it almost feels uncomfortable, but it gives a firmness that again assists the resident being able to get up out of the chair," she explained.

For Thoma-Holec, every detail, no matter how mundane, matters.

"Because," she said, "as we age, there’s so much macular degeneration and the light levels have to increase without having glare."

"We never go beyond like an 80 percent change in color in terms of the brightness or the shade."

If a resident has challenges with their memory, she said, a dramatic change could be perceived as a hole in the floor or a height change.

"It’s easy to have residents move in but if they’re not thriving or have purpose in that space, then we’ve failed in terms of our design," Thoma-Holec noted.

Needless to say, business is steady.

"There are literally thousands of units a year coming online in the Phoenix market and I don’t see that stopping for the next probably three years at a minimum," said Brendan Morrow who is with Drive Development Partners, a real-estate firm that develops senior housing.

But Morrow is not one of those developers — at least in this case. His latest project in Central Phoenix is an affordable senior-housing community geared toward veterans. And the key word here, is affordable.

Jan Dougherty is with Banner Alzheimer’s Institute. "Right now the best estimates in Arizona about 160,000 people are affected by Alzheimer’s disease or related dementia," she explained. And she said that number is expected to more than double to around 320,000 by 2025 — roughly the size of Mesa.

"You know," Dougherty said, "the question becomes in the future, will the baby boomers have the money to pay for the kind of cost that’s involved in memory care that can be up to $8,000 a month."

Which is why Doughtery said other solutions, like the project Morrow is working on right now, will likely be needed down the road since many families are not financially prepared for a dementia diagnosis.