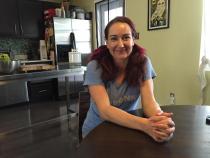 (Photo by Will Stone - KJZZ)
Sarah Dickson, a graphic designer in Scottsdale, is one of the many consumers who will have to switch policies this year in Arizona.

Sara Dickson is no stranger to healthcare.gov.

“Every year I have switched a plan because they weren’t available,” said Dickson, a self-employed graphic designer who lives in Scottsdale.

This year is no different. Her policy with UnitedHealthcare is being cancelled. And she is not enthused about the prospect of buying new insurance.

“I’ve considered not having health care because it’s too frustrating,” Dickson said, while sitting in her Scottsdale home. “But I have a daughter and it’s too irresponsible not to get coverage.”

Instead, she will most likely try to get insurance through her husband’s employer, even though it has cost much more in the past.

Arizonans will find a very different kind of marketplace when they buy insurance on the Affordable Care Act’s exchange during open enrollment, which begins Nov. 1. There will be fewer options and higher premiums. Until recently, Arizona was credited with having one of the most robust markets.

This year, more than 120,000 people in Maricopa County will lose their policies because so many insurers have fled the marketplace. This time last year, there were eight in the state’s most populous county. Now, only one remains: Health Net, which is owned by St. Louis-based insurer Centene.

This turbulence has trickled down to consumers like Dickson.

“There’s no coordinated care. And you have to start over with a new doctor every time, and things are going to get missed, and they do get missed,” she said.

For example, her 4-year-old daughter has bounced around to different doctors, causing her to be late for her annual wellness check.

“These people played by the rules. They went to the doctors in the network as they were told. And now the network’s going away,” said Bill Gould, who runs Black, Gould & Associates, a Phoenix-based insurance agency.

“It really is very sad. And the politicians and the insurance companies seem unwilling or unable to do anything about it,” Gould said.

Four thousand of their individual policies are being cancelled this year.

Across the healthcare.gov system, premiums are climbing 25 percent for the "Second Lowest Cost Silver Plan," the benchmark for how subsidies are caculated. But Arizona's situation is especially pronounced. Every county in the state, except one, has only one insurer. In Maricopa County, Health Net's rates on average are up about 75 percent. And for the rest of the state, Blue Cross Blue Shield's premiums are increasing 51 percent. A 27-year-old could see a 116 percent hike for a benchmark plan before getting a subsidy.

“This time next year, there will be less people covered by insurance than there are now,” Gould said.

He thinks young people may just take the penalty for not having insurance, about $700 dollars for a single person, or a small fraction of your income.

But proponents of the Affordable Care Act say these numbers don’t tell the full story.

“We don’t believe this is the failure of the exchange right now,” Marcus Johnson with Vitalyst Health Foundation, part of a coalition helping enroll people, said.

“Even if a health insurance plan is costing a little bit more — the subsidies, the payments that the general consumer will receive back from the government — are also going to increase,” Johnson said.

Indeed, the majority of consumers here qualify for the tax credit and will only have to pay a monthly premium of 75 dollars or less, according to federal numbers.

Johnson adds that while there is no real competition among insurers on the exchange, “there are still multiple plans within each health-insurance company in every single county."

Most counties in Arizona have four or five plans available. The caveat: these are HMO policies with limited benefits out of network.

With only one insurer on the exchange in Maricopa County, consumers may have to travel far to visit a doctor or go to a hospital in order to stay in network. To add some options and accommodate the influx of customers, Centene has partnered with insurer Cigna to use its network, as well.

Jerry Anderson runs Anderson Insurance Services and says many people will not pay the full costs, but for those who do it will be tough.

“We are talking middle class, you are just above the line to qualify for subsidies so you will have to pay the full premium, and they simply can’t afford it,” Anderson said.

For example, a 40-year-old couple with two children would pay about $1,400 per month without those subsidies. Anderson has changed the way he does business.

“It used to be that most people would pick a plan and they would stay with it for years. And now because of the dramatic changes every year, everybody has to think on a 12-month basis,” Anderson said.

But those who run the exchange expect more people who are currently not on the exchange will qualify for subsidies and will come on board.

“The Arizona market has frankly been a bit of an outlier,” Kevin Griffis with the Department of Health and Human Services said.

Prior to this year Arizona actually had the lowest rates in all of the healthcare.gov system.

“Now what I think we are seeing is that the rates are overall catching up with the actual costs,” Griffis said.

In 2016, average premiums for most Arizonans who had tax credits decreased by $3 per month. Two premium stabilization programs are going away this year, said Griffis, and “that will create some upward price pressure.”

Don’t forget the big picture, he said: 410,000 more people are insured in the state than before the Affordable Care Act.

Even consumers like Dickson who are frustrated acknowledge that’s a good thing.

“I had a fairly positive outlook on it and it actually worked for me in the beginning,” she said.

The question:  Can it start working again for people like her this open enrollment period?