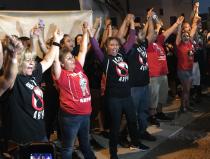 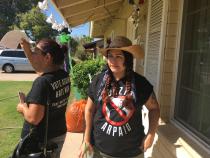 PHOENIX - At a parking lot in Central Phoenix, some 500 volunteers gather to knock on doors to persuade voters to vote against Maricopa County Sheriff Joe Arpaio. Organizers are calling this the biggest canvass to date against the six-term sheriff, who has been in office nearly 24 years and is running in a tough re-election race.

Arpaio isn’t just a local sheriff. He’s earned friends and foes across the U.S. for his ties to Republican nominee Donald Trump and for his push against illegal immigration here. At one point Arpaio’s office conducted immigration patrols and worksite raids, though federal courts have since suspended those tactics.

People are traveling from all over to support the campaign, which calls itself “Bazta Arpaio,” a play off the Spanish word meaning “enough” and spelled to include the abbreviation for Arizona.

Rene Martinez came from California. The electrical workers union he works for sent him here to help defeat Arpaio.

“We’ve heard basically about the profiling,” Martinez said. “We’ve heard about the sheriff’s department stopping people just based on how they look.”

Three years ago, a federal judge found Arpaio’s immigration enforcement tactics racially profiled Latinos. Now, the sheriff faces criminal contempt of court charges for disobeying the judge in that case and continuing to make immigration arrests after he was ordered to stop. The formal criminal contempt charge was filed against the sheriff on Oct. 25. If convicted, he could face a maximum of six months in prison.

All of this motivates his opponents. Many are immigrants themselves. They wear matching black Bazta Arpaio t-shirts. Giant balloons depicting Arpaio in prison stripes and Donald Trump in a KKK outfit are propped up adjacent to a stage where speakers fire up the crowd.

“Joe Arpaio is done,” a woman shouts into a microphone. “He's already lost. He's on his way down. What our opportunity is to be the ones to knock him out.”

Later that day, three women knock on doors in the Phoenix suburb of Chandler. Only one of the three is a citizen and able to vote herself.

On their list? Minority or millennial voters who might need an extra nudge to send back their early ballots. The canvassers don’t actively promote Arpaio’s opponent, a Democrat named Paul Penzone. Instead, they pass out anti-Arpaio literature with a cartoon of him with Trump and a line through them both.

Rosa Renteria is one of the volunteers. She’s from Mexico, lives in Phoenix without papers and has feared Arpaio for years.

Renteria can’t vote, but wants to make sure those who have the right, use it. She jokes about Arizona’s former governor, Jan Brewer, who recently said Latinos wouldn’t help Democrats in this battleground state because they don’t vote.

She hopes the remarks will compel Latinos to vote to prove the former Republican Governor wrong.

Down the street, we meet a Latina voter named Marcela Santos who said she’s already mailed in her vote against Arpaio.

“Just because he is against the immigrants and deporting people and innocent people who just want to be here working, have a better life,” Santos said.

A recent poll shows Arpaio trailing by 15 points. But Chad Willems, Arpaio’s campaign manager, said his polls show Arpaio ahead. Willems is not worried about the Bazta Arpaio campaign.

“It’s really telling that you know they had to bring in people from out of state,” Willems said. “They don't have any organic grassroots support here for the people that vote here that live here.”

Arpaio has benefited from out-of-state campaign donations and raised $12 million over the course of his campaign, according to the most recent report. The money has meant lots of TV ads. One highlights his work protecting animals, another attacks his opponent, another accuses the Justice Department of unfairly trying to influence the election by announcing intentions to prosecute him for criminal contempt right as early voting began.

Willems said that message is working.

“Our fundraising has picked up immensely,” Willems said. “The number of volunteers we have out knocking on doors and making phone calls has more than doubled.”

That evening the Bazta Arpaio crew gathered in front of Arpaio’s downtown Phoenix headquarters to throw him a retirement party.

At one point, the activists catch a glimpse of Arpaio through a window in his building.

“He’s going down! Arpaio’s going down!” they chanted while joining hands and holding them overhead in a sign of victory.

On Nov. 8 they will find out if Maricopa County voters agree.