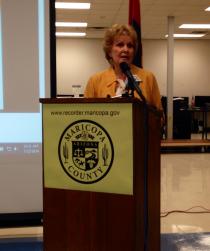 Almost 50,000 independent voters in Maricopa County have asked for a ballot for next month's primary. That's more than double the number of independents who voted in 2012's primary. Elections officials are encouraging independents to vote in the primary, and trying to drive down the number of provisional ballots cast.

Maricopa County Recorder Helen Purcell said a big part of the problem was people not knowing where to vote.

This year, Purcell hopes new electronic poll books will bring down on the number of provisional ballots. The county spent $3 million on the equipment, which allows voters to scan their driver's license or voter ID card when they walk into a precinct. Purcell says that will help voters who go to the wrong location.

"If you walk into the wrong polling place, you'll be on the list, but it'll say you need to go to 'X' polling place," Purcell said. "Then the electronic poll book will print out a receipt. You will be given that receipt. It will give you the address and directions to the proper polling place."

The county has also started sending out another notice to independents on the early voting list 33 days ahead of the election reminding them they can vote in a party primary.