20 Years Ago, 'That Thing You Do' Featured Music, Radio Station KJZZ 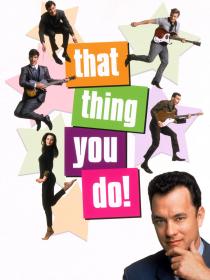 (Photos by 20th Century Fox)
"That Thing You Do!" movie poster

Twenty years ago, Tom Hanks made his directorial debut in a movie about the successes and struggles of a band that against all odds, miraculously makes it big. Not only does the movie feature one of the most well-known earworms of the mid-90s, but also a radio station called KJZZ.

"That Thing You Do!" — starring Tom Everett Scott, Liv Tyler and Tom Hanks — follows a band called the Wonders from Eerie, Pennsylvania, in 1964, who managed to strike it big, literally becoming one-hit Wonders.

As the band rises to stardom, the members head west to Los Angeles. There, they cut a record, star in a major motion picture, and go on a press tour of Southern California radio stations to promote their new record. And one of the stops

A little jazz station called KJZZ. It’s run out of a green bungalow house with a palm tree in the yard, and the DJ is played by Clint Howard, Ron Howard’s brother.

The DJ asks, "Let me ask you cats this question: who are your influences?"

Joe Blevins, contributor to The Onion’s non-satirical pop culture site The A.V. Club said, "The movie is kind of a tribute to 1960s rock, but it also ends up being sort of a testimonial for the transformative power of jazz music."

In the movie, Patterson winds up meeting his jazz hero, pianist Del Paxton. Paxton actually makes a cameo in the movie. The two play together, and it changes Patterson

It’s true. At the end of the movie we’re led to believe that Patterson stays in Southern California to pursue a career as a jazz drummer. We like to think he would have been an avid listener of our KJZZ. But in the meantime, we’ll keep doing that thing we do.