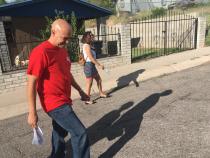 (Photo by Jude Joffe-Block - KJZZ)
Sergio Arellano walking door to door in Nogales with a volunteer.

With early voting underway in Arizona, you may be seeing more mailers in your mailbox, and be getting more knocks on your door from candidates and their campaigns. And, that’s not by accident.

Technology is helping campaigns talk to voters more efficiently than in the past and KJZZ’s Jude Joffe-Block has seen some of that firsthand, like when she followed Democratic volunteers going door to door in Prescott.

"They had certain households they were visiting and others they were skipping. For example, if a house was a solid Republican voter they didn't need to waste time there. So to find out where they should start they pulled out a smartphone. And on the app, they got a route of which houses to visit."

The MiniVAN app tells them the voter’s name and vote history at a given house. And after they talked to a voter and found out how that voter was thinking about the presidential and senate races, they were able to enter that data directly into the app.

They use are using MiniVAN to talk to voters about early voting. Means that they can either tell voter where to early vote in person or they can see if the person is on the early voting list and remind them to return their ballot.

But they explained the app wont load all the data they need in Nogales, so they were using a combo of  paper printouts with the voter info and the app to tell them which doors to knock.

Also the GOP staffers I was with said it's a challenge for him is that not all his volunteers have smartphones. The apps can be tough on the cell phone battery life, so that can also be a real challenge.

MiniVAN is made by a company called NGP VAN, which calls itself the leading technology provider to Democrats and progressive organizations and works with campaigns up and down ballot. John Lee is the firm’s chief technology officer and breaks down the app on KJZZ's The Show. Listen in the audio player above.