Scottsdale Voters To Choose Between Longtime City Leaders For Mayor 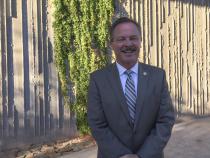 Mariana Dale/KJZZ
The development of a Desert Discovery Center in the McDowell Sonoran Preserve has been a contentious issue in Scottsdale.

When it comes to local elections, it’s a top issue for her.

“Obviously the preserve, keeping that where it is, actually expanding it would be nice too,” Auer said.

If elected, Lane would serve his third and final term as mayor. Littlefield was on the council for 12 years.

Littlefield said the contested Desert Discovery Center plan for the preserve is part of what inspired him to run for mayor.

“I believe my opponent is selling out Scottsdale's special character and high quality of life for campaign contributions,” Littlefield said.

A major issue for the candidates is the Desert Discovery Center that could be built in the preserve. The city has hired a company to create preliminary designs and research educational programs and is collecting comments from the public.

Littlefield wants to see plans for the contested quashed and a law to prevent future commercial construction in the preserve. Lane wants voters to have the final say on additions to the preserve.

"There is no designs on developing the preserve or anything like that," Lane said. "The hyperbole has gotten pretty intense."

Littlefield and Lane agree on some issues, like the significance of the preserve and light rail as a poor fit for Scottsdale, but they have been vocal in their criticisms of one another in the campaign.

Hear more from the candidates: