Did You Know: Raceway Is Oldest Pro Sports Venue In Arizona 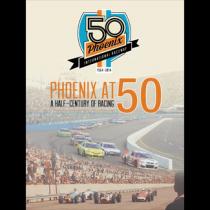 This is where fast cars and eager fans hang out every year. And this year marks the 50th anniversary since it first opened.

Phoenix International Raceway first opened in 1964. The one-mile track is the home of two NASCAR annual race weekends. Did You Know…PIR is the oldest professional sports venue in Arizona?

“We’re four years older than the Suns," said Zac Emmons with Phoenix International Receway. "So we are the original pro-sports venue here in town. If you can think of a great race car driver he’s competed at PIR, either in the past or maybe still currently.”

PIR sits on the foothills of Estrella Mountain in Avondale. When it first opened 50 years ago, it was home to open-wheel racing. It was the U.S. western home for these types of races. At the time it was a one-mile oval and a nearly three-mile road course.

NASCAR races began here in November 1977. It hosted one of the Winston West Series events. Eleven years later, NASCAR decided to feature one of its premier Winston Cup series here in the fall.

Since then there have been many changes to the park, including the construction of a three-story building housing VIP suites, an underground access tunnel, more grandstand seats that accommodate more than 50,000 fans. And a hillside seating area on the east end of the track.

The track has also gone through many changes. At one point it was reconfigured to a one-mile oval course with a unique dog-leg curve in the back stretch. PIR is considered a small track compared to, say, the Daytona International Speedway. In 2005, NASCAR added a second racing weekend for the spring. That prompted PIR to install lights for the evening races.

Emmons said some well-known people besides drivers have passed through here. One in particular was a boy who sold race programs on the weekends. That little boy is former Arizona Sen. Jon Kyl.