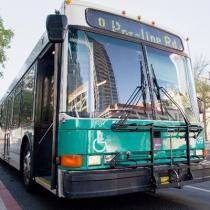 (Photo courtesy of Phoenix Public Transportation via Twitter)
Starting July 1st people who buy an all-day pass as they board a bus will pay the same as people who pre-purchase.

The bus is a big part of many people's’ everyday lives - people like Marisol Misquez, who was waiting for a bus Monday morning in Phoenix. And sometimes that wait can be frustrating.

“They would be scheduled to get there at a certain time and they wouldn’t,” said Misquez. “They would be late. So it would get me late to work.”

Misquez said she hopes changes to the bus schedule later this month help with that. Starting Oct. 24, all routes serving Phoenix will run every 30 minutes or less. And service times will be extended, starting earlier and ending later every day.

“If they’re changing it that’s good, because I noticed that a lot of people post on Facebook that now they can get extra shifts,” Misquez said. “And it’s about time that they did it.”

Timing is important to riders who are dependent on the buses, but they also want the experience on the bus to be good. Rider Gregory Sanchez said he thinks they should be cleaner.

Steve Goldstein spoke to Maria Hyatt, public transit director for the city of Phoenix, about what changes riders will see this month, and what’s to come down the road.