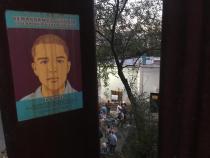 (Photo by Jude Joffe-Block - KJZZ)
A sticker with the likeness of Jose Antonio Elena Rodriguez is seen on the border fence in Nogales, Arizona overlooking a mass on the Sonora side on Oct. 8, 2016.
(Photo by Jude Joffe-Block - KJZZ)
A painitng and plaque honoring the memory of Jose Antonio Elena Rodriguez were unveiled after a special mass on Oct. 8, 2016, in front of the place where he was shot by a U.S. Border Patrol agent in 2012.

Four years ago, on Oct 10. 2012, a U.S. Border Patrol agent fatally shot a Mexican 16-year-old in Nogales, Sonora, through the border fence. A painting and plaque in remembrance of the teen, Jose Antonio Elena Rodriguez, was unveiled in Nogales over the weekend after a march and special mass.

The bishop of Nogales led the special mass Saturday evening dedicated to Elena Rodriguez’s memory. He was shot 10 times by Border Patrol agent Lonnie Swartz in 2012.

Swartz is facing second-degree murder charges and has a trial set for February. He has said he was reacting to rocks thrown from the Mexican side of the border.

Sister Gabi Williams, a nun from Tucson, was part of a group that watched the mass through the Arizona side of the fence.

“I kept putting my hand through the wall and waving to the people on the other side, and then the bishop and the priest were all waving their hands back to us,” Williams said. “So they recognized all of us here. So we were one. The wall isn’t here. We really in heart are one people.”

Williams said she hopes the new painting of Elena Rodriguez will be a reminder to respect each other’s dignity. She was among the group of faith leaders, human rights workers and activists in town over the weekend for a conference focused on demilitarizing the border organized by School of the Americas Watch.