Refill? You Might Want To Wash That Office Coffee Mug First 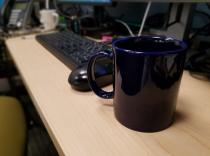 (Photo by Annika Cline - KJZZ)
Mugs kept at the office can accumulate a lot of bacteria if not washed daily.

When it’s time for an afternoon pick-me-up, if you reach for your mug from the morning to rinse out and refill — wait just a second. There might be something in that mug you don’t want.

“You find all kinds of bacteria. We do find E.coli in coffee cup mugs, and other types of fecal bacteria,” said Dr. Charles Gerba with the University of Arizona.

Gerba did a study 15 years ago about the germs found on office coffee mugs - and the research still gets picked up and circulated on the Internet. It may be a morbid fascination with just how gross the office mug can get.

“Yeah have you ever looked around offices and seen somebody was gone for a week, and there’s usually mold growing in his coffee cup if he doesn’t completely wash it or dry it out?” Gerba asked.

And the communal sponge in the break room only makes it worse, because it’s also a breeding ground for bacteria. Gerba said take that mug home and run it through the dishwasher. Too bad we can’t do that with the desk phone, too - he says that’s usually the germiest item on a desk, “because nobody ever cleans it or wipes it.”

“Then number two is your desktop because apparently nobody cleans that until they stick to it, from what I can see,” Gerba said.

It is pretty easy to fight office germs by disinfecting surfaces once a week, using sanitizer and washing mugs after each use. Gerba said cold season is ramping up, but those steps can reduce exposure to viruses by 90 to 99 percent, and let you sip that cup of office java in peace.