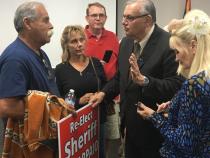 Arpaio said at the meeting of the Surprise Tea Party Patriots that his investigation would continue. About 200 people gathered in a meeting room in Sun City West to hear the sheriff speak.

Many in the crowd were disappointed that Donald Trump — a longtime supporter of the birther movement — distanced himself last week when he said Barack Obama was born in this country.

But Arpaio said Trump’s statement did not contradict his investigation into the birth certificate.

“[Trump] said where [Obama] was born, I have never said that, I am talking about a phony document not where he is born,” Arpaio told KJZZ after the event. “It is my duty to investigate identity theft, forged documents, especially government documents.”

Arpaio said he was aware the investigation was a target for critics, but said, “When you know you have some good evidence to just say goodbye for political reasons, I don’t do that.”

The sheriff’s lead investigator on the case, Cold Case Posseman Mike Zullo, told the crowd he believes Trump was just being strategic when he made remarks that seemed to disavow the birther movement.

Zullo said he has a high up source at the Kapiolani Medical Center in Hawaii who said Obama was not born there. Zullo also said he is getting Obama’s birth certificate forensically analyzed in another country.

At the same presentation, Surprise Tea Party Patriots member Jeff Lichter described how he and others from Arizona met with Donald Trump in 2011 to discuss Obama’s birth certificate, and later gathered signatures to get Arpaio to take on an investigation.

Sun City West resident Sue Stock was an early supporter of the birth certificate investigation and said she enjoyed hearing the sheriff speak Tuesday night. Still, she questioned what impact the investigation could have at this point.

“What good does it do now Obama has already done damage and Trump said it was over with?” Stock said.

Arpaio is running for his seventh term in November. His opponent, Democrat Paul Penzone, has criticized Arpaio for pursuing the birth certificate investigation.