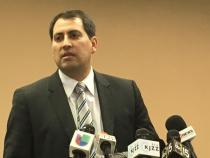 Arizona’s controversial immigration enforcement legislation, Senate Bill 1070, has been the subject of litigation for six years since it was signed into law, but that may soon be over. On Thursday the state of Arizona reached an agreement with the law's opponents. The agreement includes new guidance over the law's last remaining key provision.

The hardline law made international waves and was met with protests, boycotts and multiple lawsuits.

Federal courts have already struck down much of SB 1070, including provisions that sought to criminalize unauthorized immigrants in the state. Yet up until Thursday, a coalition of immigrant rights groups continued to challenge the last key provision still standing.

The so-called “show me your papers” provision, also known as Section 2b, requires police officers to check immigration status if in the course of enforcing other laws if they suspect someone is in the country illegally.

Immigrant rights groups had an appeal pending at the U.S. Ninth Circuit Court of Appeals asking to block that provision along with another that allows local police to transport unauthorized immigrants to federal authorities. The coalition includes the Mexican American Legal Defense and Educational Fund, the American Civil Liberties Union, the National Immigration Law Center and other groups.

Now Arizona Attorney General Mark Brnovich has agreed to issue new guidance to law enforcement in the form of an informal opinion on how those two provisions can be enforced, and in exchange, immigrant rights groups will drop their pending appeal.

Brnovich’s opinion makes clear that being in the country illegally is a civil violation, and local police cannot arrest someone simply because of their immigration status, and cannot prolong detentions to check someone’s immigration status with federal agents. The opinion also says race and ethnicity cannot be a factor when police decide whether to check immigration status. It  does make clear that local law enforcement can arrest someone if they have probable cause to believe someone committed a federal immigration crime, such as illegal re-entry after deportation. It also includes a protocol for law enforcement to keep records when they enforce the provision.

Victor Viramontes of MALDEF said the new guidance was critical and shows just how narrow the role of local law enforcement is.

“For the first time local law enforcement in Arizona has been directed they cannot make immigration arrests, and they cannot extend arrests based on suspicions about immigration,” Viramontes said.

Viramontes said if an officer stops someone in a traffic stop and then suspects they might be an unauthorized immigrant, the officer can only detain them as long as the traffic stop takes to resolve, and cannot hold them past that time in order to check immigration status.

Attorney General Mark Brnovich said the settlement was good news for Arizona because it allowed the key provision to stay in effect and by ending litigation, “it allows us to move on from this issue as a state.”

As part of the settlement, Arizona will also drop an appeal that sought to reinstate two provisions of the law that prohibited day laborers from soliciting work. The settlement also blocks another provision that allowed the state to seize the vehicles of someone found to be transporting an unauthorized immigrant.

Viramontes said litigation has essentially gutted the law and dismantled its original intent.

“This law was intended to be a web of complex criminal prosecutions with the idea of putting law abiding immigrants in jail,” Viramontes said. “Now all of those criminal provisions have been put to the side.”

But Sal Reza, a longtime advocate for day laborers with the organization Tonatierra, compared the news of the agreement to “bitter honey” referencing a Spanish-language song.

He was disappointed Section 2b will remain on the books and will no longer be challenged.