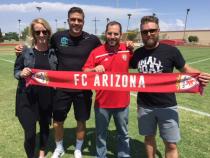 Football Club Arizona is expected to make its debut next spring in the National Premiere Soccer League, playing its home games at Mesa Community College.

Scott Taylor has a vision.

“We’ve done our demographical [sic] research and we know that most of kids that play youth soccer live in Chandler, Mesa, Gilbert, Ahwatukee, Tempe," Taylor said. "So, we know that there’s a large market for it here.”

The Chandler-based insurance company owner is betting his own money that pro soccer can finally find a permanent home in the east.

“Not only is there no pro soccer, there’s no professional sports on this side of town, except for spring training.”

That’s because the region’s only pro soccer team, Arizona United, left for the West Valley last year to play in Peoria after spending just one season at Scottsdale Stadium.

The new FC Arizona squad promises to not only play their games in the community, but be part of it as well.

The first piece of that community puzzle was the squad’s first player signing: Tempe native Andrew Weber, a goalkeeper with experience in the MLS, America’s largest and most successful soccer league.

“The soccer culture is here," Weber said. "We have to tap into it the right way and get people excited about it. If we put a good product on the field, it will take care of business.”

It’s an easy sell for Grace Stufkosky of Gilbert, one of the Valley’s biggest soccer fans.

“My family, mostly me, spends an inordinate time watching soccer, waking up at 4:30 on Saturday mornings to catch my favorite English team, then going to out to watch my kids games for the rest of the day, then going to my husband’s games at the end of the night and cheering everybody on,” Stufkosky said.

Stufkosky believes the predominance of youth soccer in the area will make it easier to market a pro team to more people like her.

“There are tens of thousands of kids playing youth soccer here at any given weekend," Stufkosky. "Their parents are already investing their time with them, so for them to make the transition to come out on a Saturday night on a gorgeous spring evening to MCC to support the team, I think it can happen.”

There are also of reasons why it couldn’t happen.

“There’s definitely going to be some challenges here. I think the other owners have found that have tried to start soccer franchises here in Phoenix, that goes without saying,” said Adam Thelwell, a Manchester, England native who grew up a fan of the fabled Manchester United squad.

Thelwell is the owner of the Valley-based Small Goal Soccer, which arranges amateur leagues and tournaments in six states.

One obviously issue will be the Arizona heat.

“The temperatures are going to be an issue but I think again the club has done really well by scheduling all their homes in the spring. Arizona is beautiful in the spring right, then let’s face it, it turns into an oven” Thelwell said.

When the oven is on here, the team will play the latter part of its schedule in cooler climes.

Thelwell said there’s another reason why it could work at Mesa Community College.

And said team owner Scott Taylor, another key factor will be cost.

Taylor is counting on the large community of East Valley soccer fans to keep his new franchise alive and kicking.

“This is what can bring them together," Taylor said. "Something to do on a Saturday night, so while initially we not be their first love, I think it’s something that people will get excited about and grow to love.”

Mesa officials are also hoping fans will grow to love the new team and bring extra visitors and revenue to the city and Mesa Community College finds a tenant for its seldom used stadium.

FC Arizona is slated to debut in the National Premiere Soccer League league in March, a league considered the minor leagues of pro soccer, a step below the Arizona United in the United Soccer League who are in the final two weeks of their six-month season in Peoria.

EDITOR'S NOTE: A previous version of this story  misspelled the name of Adam Thelwell.