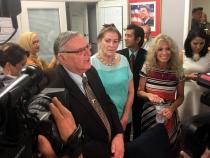 Jude Joffe-Block/KJZZ
Arpaio has been in office 24 years and is known nationally for his hardline stance on illegal immigration. 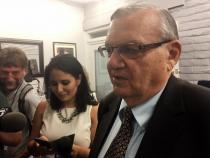 Maricopa County Sheriff Joe Arpaio will go on to run for a seventh term in November after easily winning his Republican primary race last night. As of Tuesday evening with 99 percent of precincts counted, Arpaio had captured 66 percent of the vote.

Arpaio has been in office 24 years and is known nationally for his hard-line stance on illegal immigration. As a prominent ally of Republican presidential candidate Donald Trump, he is expected to introduce Trump at his Wednesday night event in Phoenix.

The Justice Department’s Public Integrity Section in Washington, DC is now handling the investigation and will decide whether to prosecute the 84-year-old sheriff.

When asked about the case after the primary election results came in on Tuesday evening, Arpaio said he looked forward to the truth coming out.

In November, Arpaio will face off against Democrat Paul Penzone, who also challenged Arpaio in 2012. Penzone lost by 6 points in a three-way race that year.

In anticipation of Arpaio’s primary victory a coalition of grassroots organizations announced they will launch a “Bazta Arpaio” campaign to mobilize voters who oppose the six-term sheriff to vote in November. The group's name is a play on the Spanish word for "enough" and the state's abbreviation.

Of the activists who protest the sheriff, Arpaio said, “the more they go after me the more I will keep fighting for the people here. “

Arpaio said he had raised $11.3 million for his campaign.