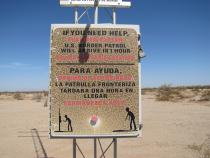 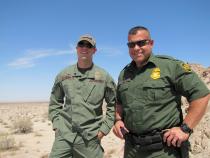 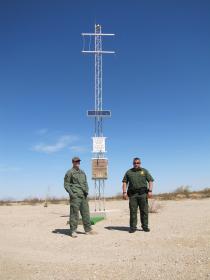 (Photo by Maya Springhawk Robnett - KAWC)
Arizona has 56 of these mobile, solar-powered beacons.

Fifteen years ago, 14 undocumented migrants were found dead from exposure along the U.S.-Mexico border near Yuma. In response, Yuma Sector Border Patrol developed emergency beacons for migrants in distress. But the deaths continue, leading a Tucson human rights organization to create a database to identify the dead.

It’s always hot in the Yuma desert in the summertime along the border.

For more than 30 minutes, Casey Roloff, a supervisory agent with the Yuma Sector Border Patrol, drove deeper into this wasteland of dust and rocky terrain.

“So today, I’m taking you guys down to one of Yuma Station’s eastern corridors," he said while watching the dirt road. "It’s actually called Vokopi ridge.”

A tall object off in the distance nearly fades into the bright backdrop of shrubbery and bleached sand, were it not for the large blue beacon light on top of it.

If you push the red button for help, a radio signal goes out alerting the Border Patrol, who arrive within the hour.

Many migrants crossing the border illegally, sometimes smuggling illicit drugs, don’t make it through this area — be it from thirst, hunger or heat.  Fifteen summers ago, in Yuma County, near the small town of Wellton, 14 undocumented migrants died.  Yuma Sector’s solution was to build these emergency beacons, which were then adopted by other Border Patrol sectors.  Arizona has 56 of these mobile, solar-powered beacons. They cost $3,000 each to build and $200 each per year to maintain.

Even with this system in place, deaths still occur.

Since October, the Yuma Sector Border Patrol has performed 30 rescues and found the remains of six migrants. Roloff is part of the BORSTAR, the search and rescue unit which found two of those bodies this July.

“We saw six vultures take off from the tree and that kind of clued us in that we may be very close to that missing subject and sure enough as we approached we found the subject that was lying beneath the tree," Roloff said. "We just called the appropriate authorities who then sends a coroner down and that coroner comes and retrieves that deceased subject for us.”

Language like that disturbs human rights advocates, who worry it dehumanizes border crossers.

Robin Reineke, the executive director of the Colibrí Center for Human Rights, said she’s concerned that programs such as the Rescue Beacon System and 15 years of policies normalize migrant deaths as just another border issue.

“Rather than looking at the policies that have resulted in unprecedented loss of life on the border, we’re coming up with Band-Aid attempts that over the past 15 years have not really resulted in a drastic change in mortality along the border," said Reineke.

Colibrí Center for Human Rights, an organization dedicated to ending migrant border deaths, recently raised more than $1 million to fund a DNA database to help identify the remains of dead migrants found on the U.S.-Mexico border.

The Pima County Medical Examiner’s office has kept DNA records of every yet-unidentified dead migrant for nearly 15 years — totaling more than 900. But Reineke said that’s not necessarily helpful. Not only are the families of missing migrants afraid to go to law enforcement, but often due to their undocumented status, they don’t have the right to access the DNA database used by U.S. agencies. And without a sample from a family member, there is nothing to compare with the DNA of a dead migrant.

“We’re just at the very beginning of a at least three-year project where we’re going to be collecting hundreds of DNA samples from families of the missing,” Reineke said. “There are so many forces trying to disappear these people. The desert erases people very quickly. Policies that have forced people out into the most inhospitable parts of southern Arizona. And these are human beings.”

Colibrí plans to roll out the new database by mid-October.