Will A Criminal Referral Hurt Or Help 'America's Toughest Sheriff' In Primary? 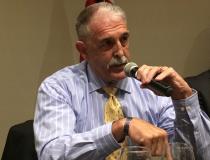 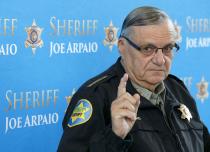 Six-term incumbent Maricopa County Sheriff Joe Arpaio is by far the favorite to win next week’s Republican primary. But just 11 days before the Aug. 30 primary election, a federal judge referred the sheriff and three others for criminal contempt charges for repeatedly violating orders in a racial profiling case.

That news could be a boost to candidates K. Wayne Baker, Marsha Hill and Dan Saban, who are all challenging Arpaio in the Republican primary. Meanwhile, supporters of the sheriff say the judge's actions could wind up helping Arpaio galvanize support.

Still, it's hard to know what kind of an impact any news can have on the primary at this date, given that early voting began on Aug. 3, and many voters who vote by mail have already sent in their ballots.

Dan Saban, a retired Buckeye Police Chief who also challenged Arpaio in 2004 and 2008, said he heard news of the ruling almost immediately.

“A minute or two after it came out, my phone just lit up from community member leaders from across the community, elected officials called, and said ‘Oh my gosh,’” Saban said.

Saban is Arpaio’s leading challenger. He said the day the sheriff was referred for criminal charges was sad for law enforcement and he's since called for Arpaio to resign.

“When I sit back over the last 12 years and watch the fiscal irresponsibility, the abuse of authority, the constitutional oath of office violations, knowing that I never did any of that, I feel compelled to offer the average voters another choice,” Saban said. “It is comparing and contrasting; this is what you have, this is what you should have.”

U.S. District Court Judge Murray Snow referred Arpaio for criminal contempt charges after finding the sheriff purposefully kept enforcing federal immigration law for 17 months after the judge ordered him to stop. The judge concluded Arpaio wanted to maintain his tough immigration stance in order to help his re-election efforts in 2012.

Snow also found the sheriff purposefully withheld evidence from the court and made misstatements under oath. Snow has been overseeing reforms at the sheriff's office with the help of an independent monitor after finding the sheriff's immigration enforcement tactics discriminated against Latino motorists.

Arpaio's primary challengers are underdogs. At last fundraising report, none of them had broken six digits while the sheriff has raised close to $10 million.

An early August survey of 484 likely Republican and independent voters by OH Predictive Insights found Arpaio leading the primary race with 67 percent of the vote, Saban with 13 percent, Hill and Baker with 2 percent each, which 16 percent were undecided. The poll has a 4.45 percent margin of error and did not include cell phones.

Saban acknowledges Arpaio’s base will remain loyal to the sheriff, but he thinks the news of the criminal referral is likely to matter to voters who haven’t made up their minds yet.

Fellow challenger Marsha Hill, a former MCSO posse commander, agrees. “The sheriff is supposed to be the moral compass of the sheriff’s office,” Hill told KJZZ

The day after the criminal referral came down, candidate K. Wayne Baker posted to his campaign Facebook page: “This could be a game changer in the primary election,” and "we need to remove the black cloud that hovers over this organization.” Baker is a retired Maricopa County Sheriff’s Office deputy.

But Arpaio’s campaign manager Chad Willems said it is important to not conflate the judge’s referral with an actual criminal charge.

“There have been no charges filed. There is no indictment, this is just simply a referral— the judge’s opinion that he wants another agency to look at it,” Willems said. “We really do welcome the fact that an independent unbiased agency will be taking a look at the law and the facts surrounding this case."

Arizona U.S. Attorney John Leonardo is currently reviewing the judge’s referral. A spokesman for his office said there is no timeline on a decision.

Arpaio's criminal lawyer Mel McDonald said he will be asking the U.S. Attorney to decline the case. If Arpaio is criminally charged, McDonald said he will defend Arpaio in a trial and is confident he will win. Criminal contempt can be charged as a misdemeanor or a felony, and the punishment can be prison time.

“For the most part, people see this case as very political,” Willems said. “So for our supporters and constituents, by and large they are looking at this all with a big grain of salt.”

Arpaio supporter Barb Heller believes the federal judge’s actions are part of an effort by the federal government to retaliate against Arpaio for initiating an investigation into President Barack Obama’s birth certificate.

“Basically it was sent down the pipeline that we’ve gotta stop this guy— period,” Heller said.

Former Arizona Republican Party state chairman Tom Morrissey said he thinks many Republicans voters are viewing Arpaio as a victim of a federal judge who went too far.

“I believe that this court ruling is being viewed by the voters— at least the voters I am talking to— as a piling on,” Morrissey said. “ And I think it is going to help the sheriff way more than it is going to hurt him.”

But for Republican voter Joe Dopak, Arpaio’s legal troubles in the past year were a turn off.

“I began to think, maybe he was preoccupied now,” Dopak said. “Maybe it would be good to look at somebody new for a change.” Dopak has always voted for Arpaio since retiring to Sun City West from the Chicago suburbs in the mid 2000s. This time, he cast his ballot for Dan Saban.

The winner of the Aug. 30 primary will face Democratic candidate and former Phoenix police officer Paul Penzone in the general election.