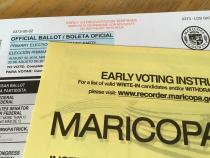 If you don’t plan to show up at the polls next Tuesday and still have that mail-in ballot on your coffee table, election officials say time is running out to ensure your vote counts in the August 30th primary.

Arizona Secretary of State Michele Reagan says you should take action today. “If you still have that at home, vote your ballot, sign it, seal it, and get it in the mailbox as soon as you can,” Regan said.

If you plan to cast a ballot at the polls, individual precinct voting is back in Maricopa after the county’s experiment with voting centers went awry in the Spring with long waits during the March presidential preference election.

Also, unlike the presidential primary, independents are allowed to vote in the state primary.

Unaffiliated registered voters can request a ballot from the party of their choosing when they show up at their polling places.