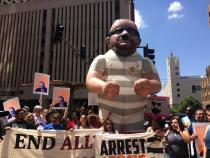 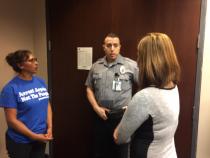 The ruling follows a May order in which the same judge, U.S. District Court Judge Murray Snow, found Maricopa County Sheriff Joe Arpaio and his chief deputy in civil contempt of court. In that ruling the judge also determined the sheriff and his Chief Deputy Jerry Sheridan had intentionally violated court orders and had made misstatements under oath.

Harris, who studies police reform legal cases, said this situation is rare, but so are the facts in this case.

Judge Snow began overseeing reforms at the sheriff’s office three years ago after finding Arpaio’s deputies discriminated against Latinos in their zealous efforts to crack down on illegal immigration. Latino drivers sued the sheriff’s office in 2008 in a class action racial profiling suit in which they were represented by the American Civil Liberties Union.

But the sheriff and his staff didn’t follow court orders. They kept making immigration arrests for over a year after the judge forbade it. They withheld evidence.

At a June hearing Snow said Arpaio and Sheridan had lied to his face.

In Friday’s much anticipated ruling, the judge makes the case in 32-pages why civil contempt remedies are not adequate to address the scale of the sheriff’s disobedience and the harm it caused Latino plaintiffs, and why a criminal referral is necessary.

He wrote, “The court has exhausted all of its other methods to obtain compliance.” He also said Arpaio has not had to personally pay for any of his misconduct.

“The court must feel, you know, how else do I get this guy’s attention? How else do I get him to follow the court’s orders instead of treating them like they are options,” Harris said.

Snow’s Friday ruling states that even after the judge ordered a civil contempt of court hearing in early 2015 to address violations of court orders, the sheriff and others continued to withhold evidence and made misstatements under oath in the course of that hearing.

After the judge questioned Arpaio directly in April 2015, Arpaio revealed he had hired a confidential informant named Dennis Montgomery to do a secret investigation using documents Montgomery had allegedly obtained from the Central Intelligence Agency.

Snow instructed Arpaio to turn over all documents from that investigation and to personally see that it was taken care of. But three months later, the independent monitoring team Snow assigned to oversee reforms at the sheriff’s office discovered the sheriff’s office had failed to comply.

The monitoring team found out the sheriff’s office had failed to turn over 50 hard drives from Montgomery.

In a separate incident, the monitor also learned the sheriff’s staff did not disclose that their knowledge that a sergeant had been hording a stash of 1,459 IDs. An earlier court order had required the sheriff’s office to turn over such IDs to the court, after evidence surfaced suggesting deputies were improperly taking property and IDs from Latinos.

Back in July, Snow ordered U.S. Marshals take custody of the 50 hard drives and the IDs.

Captain Steve Bailey and attorney Michele Iafrate are being referred for criminal contempt because Snow concluded they violated orders by not alerting the court or its independent monitor to the 1459 IDs, and not disclosing information when asked.

In his recent order, Snow provides an explanation for why Arpaio may not have turned over the 50 hard drives from the confidential informant as the judge had ordered:

“To reveal those hard drives would have revealed that they did not contain the materials that Montgomery had described. It may have called into question some of Sheriff Arpaio’s other ongoing investigative activities in which he had partnered with Montgomery, such as the alleged illegitimacy of President Barack Obama’s birth certificate. It would also reveal that MCSO actually took possession of, and intended to use, material that it believed to have been stolen from the CIA.”

It is now up to U.S. Attorney John Leonardo to decide whether to take legal action against the six-term sheriff. It is also possible Leonardo can pass the decision on to a separate division of the U.S. Justice Department.

A spokesman for the U.S. Attorney's Office said there is no timeline for the office to make a decision.

If federal prosecutors decline the case, Bolton has the option of assigning a special prosecutor. The charge could be a misdemeanor or a felony, and the penalty could be prison time.

Community activists who have battled the sheriff’s immigration enforcement tactics for almost a decade said they would try to persuade federal prosecutors to criminally prosecute Arpaio.

Gutierrez said he is still disappointed that four years ago the Justice Department closed a criminal abuse of power investigation against Arpaio.

They brought a giant inflatable balloon of Arpaio wearing prison stripes and chanted "arrest Arpaio, not the people." Immigrants who had previously been arrested in Arpaio's worksite raids and spent time in his jails said the sheriff was the real criminal and deserved to be behind bars. A small group made their way inside and demanded a meeting with Leonardo. Ultimately, they were able to share their stories with three members of the U.S. Attorney's staff, according to Viridiana Hernandez, who was present and serves on the community advisory board the judge created.

Arpaio’s criminal defense lawyer, Mel McDonald said there was not sufficient evidence against his client for a criminal referral and said he too would be reaching out to federal prosecutors to make that point.

“We will meet with the U.S. Attorney’s Office and try to convince them not to bring a criminal contempt charge,” McDonald said.

He said if the case does go to trial, “we will ask for a jury and we will litigate it to the bitter end, and I believe we will win.”

Lee Stein who represents Chief Deputy Sheridan said in a statement that he disagreed with the court’s conclusions.

“[We] think there is ample evidence that Chief Sheridan did not intentionally violate any of the Court’s order,” the statement reads. “He took responsibility for his mistakes many months ago and this next step was not warranted nor necessary.  We are fully prepared to present the facts in court and are confident that when all the facts and circumstances are presented, the judge who hears that case will agree that Chief Sheridan should not be held in criminal contempt."

Hours after the judge’s ruling came down on Friday evening. Latino community leaders gathered in downtown Phoenix to applaud the judge’s decision to refer Arpaio for criminal contempt. Though attorney Danny Ortega said the moment was bittersweet.

“We have to continue to remember the pain that [Arpaio] caused in our community by enforcing the law in a discriminatory manner,” Ortega said.

Judge Snow also directed the Maricopa County on Friday to establish a $500,000 fund to compensate people who were wrongfully detained by sheriff’s deputies, some of whom were deported.

Lydia Guzman said the Latino community was dismayed when Arpaio ignored court orders and kept violating their rights. She helped successfully sue Arpaio for racial profiling, which is how this case began.

“I think this is the beginning of the end for Arpaio,” Guzman said.

Next week Arpaio faces three challengers in the Republican primary.

The Show
Hear more about the case on The Show