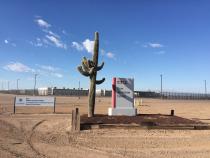 The U.S. Department of Justice’s announced plans on Thursday to phase out contracts with private prisons, citing concerns over safety and security. Though Arizona has 11 privately operated prisons and detention facilities, none of their contracts are expected to be impacted by Thursday’s announcement.

The memo came after a critical report by the Department of Justice’s Inspector General that found privately run facilities had more safety and security issues than those run by the government.

Those 11 facilities in Arizona include a mix of private prisons contracted by the Arizona Department of Corrections to house Arizona prisoners, as well as facilities contracted by other states, U.S. Immigration and Customs Enforcement and the U.S. Marshals Service.

Caroline Isaacs of the American Friends Service Committee Tucson office has been advocating against for-profit prisons for years and wants to see them phased out in Arizona, too.

“This is a great opportunity for our leadership to take a look at our entire criminal punishment system and determine is it working? Is it making us safer?” Isaacs said.

The Arizona Department of Corrections declined to comment on the Justice Department plan to phase out Bureau of Prisons private prison contracts.

“That is something that Arizona should pay attention to because if we have contracts with these companies and they are now on shaky financial ground, what might that mean for the facilities under contract here?” Isaacs said.

In response to a query about the Justice Department’s memo, Corrections Corporation of America spokesman Jonathan Burns wrote in a statement that the Bureau of Prisons contracts only represent 7 percent of his company’s business. He said CCA will continue to meet the evolving needs of its partners.

Burns also disputed the findings of the Inspector General’s report.