Clean Elections May Go After Tom Horne, But Should It? 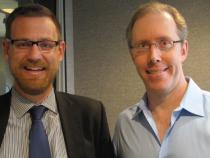 Arizona Attorney General Tom Horne has been under fire from multiple corners for months — mostly related to accusations that he helped coordinate his 2010 campaign efforts with an independent expenditure group, a definite no-no.

Horne has denied that he violated campaign finance laws.

But now he may have to face off with the Clean Elections Commission, which has given its Executive Director Tom Collins the go-ahead to investigate whether Horne did violate any laws.

We spoke to Collins and Arizona Republic editorial writer Doug MacEachern, who wrote in a recent column that “Clean Elections may be stepping in the way of the people’s ability to exercise their First Amendment rights in the purest way imaginable: at the ballot box.”