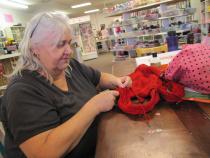 (Photo by Stina Sieg - KJZZ)
Susan Clark co-owns The Fiber Factory in Mesa. She also makes a little extra - in cash and trade - by helping fellow knitters finisher their projects. 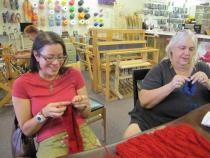 (Photo by Stina Sieg - KJZZ)
Mariana Hubbard is getting help from Clark with a red sweater. In the past, Hubbard has traded computer help for Clark's expertise. 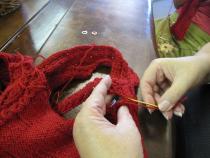 (Photo by Stina Sieg - KJZZ)
Clark shows how she begins "finishing" a garment, which includes sewing up seams and weaving in yarn ends. She says it takes a little artistry and finesse to make the whole thing sing. 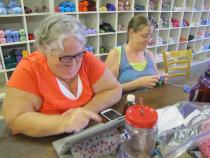 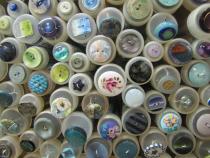 (Photo by Stina Sieg - KJZZ)
Sometimes finishing a knitted garment is simple, like just sewing together seams. Other times it involves fixing mistakes or adding buttons, snaps or other bells and whistles.

Odd Jobs is a series that looks at the surprising jobs people carve out for themselves — and why they're so necessary.

There’s the gradual, meditative act of knitting a sweater, one stitch at a time. And then, there’s the act of finishing it — as in sewing the pieces together and making the thing look crisp and polished. Ask any group of knitters about finishing, and you’ll probably get the same answer.

That’s how a group of women knitting through an afternoon at the Fiber Factory in Mesa explained it. When they get into a bind at the end of a project, they know who to call. Susan Clark isn't just the store's co-owner. She's a finisher.

And she’ll do just about anything, knit-wise, from sewing up seams to weaving in ends.

“I had the same aversion to that at one point in time,” she said.

But then Clark realized she was good at it. More importantly, people would pay her for it. Each project is unique, she explained, and requires more than just technical skill. In her words, a bit of “artistic discretion” is usually in order to get something to lay flat and fit right.

Sometimes she even has to break bad news, like when someone forgets to knit a left and right front to a sweater.

“You kind of whisper it to them,” she said, hushing her voice. “‘Um, I think you have two left fronts here.’”

While they might not believe her at first, that’s probably when they realize how much they need Clark’s expertise. Fellow knitter Joyce Lisonbee believes finishing makes or breaks a project.

So Lisonbee never finishes her own pieces if she can help it. She said she always tries to “sucker” someone else into it. Often, that someone is Clark.

“And she’s easily bought,” Lisbonbee joked. “And it doesn’t have to be money. She likes old fashioned fudge, whiskey, so, you know. She’s easy.”

One woman here recently traded computer help for Clark’s finishing. Today, Mariana Hubbard has brought in a sweater the color of red wine with a delicate floral pattern. It’s in several pieces, of course, and it might have stayed that way for a long while without Clark’s help. The last sweater Hubbard kicked Clark’s way had been set aside for two years. Sitting right next to Clark, Hubbard said knitters are famous for trading all kind of things to avoid the drudgery of finishing.

“It sounds counterintuitive that you would go through all the trouble, like baking someone cookies, which sounds like more of an effort than seaming,” she said. “But I don’t know. It is what it is.”

That’s when Clark chimed in.

“As knitters, we do what we have to do,” Clark said, with Hubbard nodding in agreement.

In fact, Clark gets so busy with finishing other people’s projects, she has to finish knitting her own Christmas gifts by the end of the summer. Right now, she’s making a few Christmas stockings from scratch for a client. Will the woman tell her family who really knit them? If Clark had to guess, probably not.