Valley Company Experiments With 3D Printing To Manufacture A Car 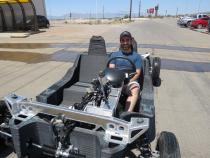 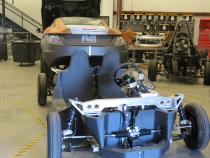 (Photo by Carrie Jung - KJZZ)
The Local Motors prototype of a 3D printed car also known as "the mule."

3D printers are capable of producing a variety of consumer products, from children’s toys to hand guns, even prosthetic limbs. Industry experts say the technology promises to be a disruptive force within the manufacturing industry.

Now a car company in the Phoenix area is trying to get involved.

Local Motors Engineer James Earl grabs a set of keys and takes a seat in one of the custom car manufacturer’s newest vehicles. He’s preparing for a test drive.

After a final check of the car’s digital dashboard, Earl hits the gas pedal on this electric vehicle to begin one of the mule’s first voyages around the company parking lot.

While this boxy car didn't breaking any land speed records. Earl says what makes it special is how it was made. Rather than piecing the car together using sheet metal and bolts, the body of this automobile was printed.

"We’re sitting in a 3D printed car," he said. "Probably the first of its kind, at least that I’m aware of."

This prototype is basic, for now. It’s windowless, roofless and jet black. The striations from the printing process show through on the sides. This car, though, is the result of hundreds of hours of research. Earl says the company decided to explore using a 3D printer because it can make the process more customizable for customers.

"Their challenge to print a car is probably one of the most challenging problems that’s going on in terms of manufacturing in the U.S. right now," said Lonnie Love, a researcher at Oak Ridge National Laboratory in Tennessee.

Love's team of scientists have partnered with Local Motors to turn 3D car printing into a viable form of manufacturing. Love says part of the challenge comes from a car’s physical size, which is larger than most 3D printers can handle. Complex shapes like fenders are also tricky to perfect.

"Imagine that you’re going layer by layer and now you’re going to have the material kind of cantilever out over open space, how do you support that. So that was one of the first problems that we had to hit," explained Love.

By the time all is said and done, the group hopes to develop a process that can print an entire car body using a 3D printer, something Love says will drastically reduce the number of parts required to build a car.

"So in terms of reducing the man hours required to put these things together, increasing the aerodynamics of the chassis and even the weight of having to fuse together parts it’s a very powerful tool that should influence specialty car applications in the next ten years," Forsyth said.

But he adds, specialty uses in the automotive industry is where this technology will be most useful for now. Because 3D printing is not yet a cost-effective technique for mass production.

"I think a lot of the primary applications are focused more on the racing side of automotive, because those parts are lower volume and higher priced," Forsyth said..

Back at Local Motors, Earl is posing for a few photos next to the car to document the event. He says he’s looking forward to building on the lessons learned from his prototype.

"For any emerging technology, you’re always going to have a couple of issues you’re going to run into and we’ve found those mostly," he said.

The plan is to unveil a more streamlined version of the car to the public at the International Manufacturing Technologies show in Chicago this September.