For Arizona Paralympian, The 'Journey's Been A Crazy One' 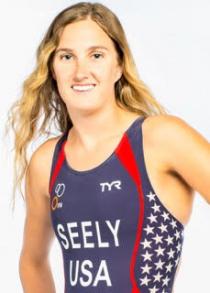 Competition at the Rio Olympics is in full swing, and will stay that way through the closing ceremonies next Sunday.

After the torch has been transferred, a new group of athletes will come to Rio for the Paralympics.

ASU grad Allysa Seely  is one of them – she’s a para-triathlete, which includes running, swimming and cycling. She’ll be doing that with a prosthesis below her left knee.

You've always been a pretty active person, like from a pretty young age, is that right?

Her freshman year in college Seely was struck by severe medical issues caused by the bottom portion of her brain protruded into her spinal column. She said chronic pain, fatigue and weakness prevented her from walking across her apartment some days. Were you even thinking at that point, 'hey I wonder if I'll ever be able to run again, much less compete in triathlons?'

"It was so far from my mind. I felt so terrible I couldn't even think about making breakfast, let alone being out and competing again. But as soon as I had a diagnosis and we had an answer and surgery was set, my perspective shifted. I promised myself the morning of surgery that no matter what happened I was going to start living again. Because for the past year and a half, I was alive, but I was really just surviving. I was no longer living."

Now there's a difference between living your life again and being a paralympian.

"I never imagined where I would be today. Honestly, when I was in rehab, all I could talk about was triathlon....Everybody else was just like 'okay, I think this girl is crazy.' Somewhere in me I knew I would be able to do it. Did I ever think I would be able to compete? Not particularly. And especially not at the level I am now. The journey's been a crazy one and I'm so glad I've come this far."

A few years after her initial surgery, doctor's amputated her left leg below her knee. The aftermath of her first surgery left the muscles in that leg so tense they caused severe pain. She was back to struggling to walk.

"I had the awesome chance prior to my amputation to meet a lot of athletes. So going into it, I had no qualms about getting back to sport. I knew for a fact I would be back out there and really I just hoped I would be back pain free...Two weeks after my amputation, I was riding a bike with one leg. Six, seven weeks later I swam 1.2 miles as part of a relay team. Three months later I did my first 5k as an amputee. And a few months after that I did my first triathlon as an amputee."