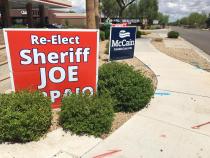 The signs are up and the ballots are out – Arizona’s primary campaign season is full-on here leading up to August 30.

Matthew Benson, a director with the Phoenix-based firm Veridus, joins "KJZZ's Here and Now" for an update on the campaign trail.

"I think the biggest surprise has just been the difficulty some of these candidates have had getting traction. In some of these primaries, take for example CD1 (1st Congressional District) and CD5 (5th Congressional District) here in metro Phoenix, you have so many candidates—half-dozen in CD1 four in CD5. So it's really difficult for the candidates to try and break through the clutter."

Arizona's primary Senate race basically seems like it's between John McCain and Kelli Ward. Does Ward have a chance here? Is there any chance that John McCain loses this race you think?

Those messages are getting out though, but they're coming from his presumptive Democratic opponent Ann Kirkpatrick. It seems as through McCain is himself looking sort of beyond the primary. Ads from his campaign are already attacking Kirkpatrick as opposed to going after Kelli Ward.

"As well he should be. I think Ann Kirkpatrick represents a much more significant  challenge to him in the long term then Kelli Ward does."

"You know in CD 5 you had one candidate, Christine Jones, break out into an early lead. She was the first candidate to start spending significant resources of her own. Of course, former executive from GoDaddy so she's got some resources behind her and she put those resources into play. And...what polling there has been indicated that she broke out and was up somewhere between five and seven points. What we've seen now is the other candidates— Don Stapley, Andy Biggs and some of the supporters like the Club For Growth, which is backing Biggs, have started spending some significant dollars of their own attacking Christine Jones."

Listen to the conversation in the player on the left to hear more about Arizona's 1st Congressional District and how Arizona legislative leaders may fare in Congressional races.