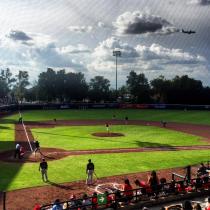 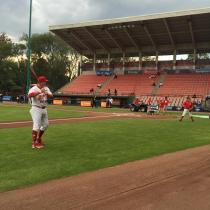 Baseball has been played in Mexico since the late 1800s, but in the 1980s, the game started to lose popularity to soccer.

Professional baseball teams in Mexico are fighting  to make the sport big again. Such is the case of Mexico City Los Diablos Rojos, one of the oldest and most traditional in the Mexican Baseball League.

It has not been the best season for “Los Diablos”. So far, they’ve faced constant defeats, despite having a new coach and a strong history of winning in the Mexican Baseball League.

Their problems are not only on the field. Unlike other teams in Mexico, Los Diablos Rojos have no subsidies from the local government for the operation of their stadium, which increases expenses. Also, Los Diablos Rojos face legal restrictions on the number of courtesy tickets allowed, which decreases their chances to draw new audiences.

For Carlos Alberto Fernandez, an expert in Mexican baseball and the current communications manager for Mexico City Diablos Rojos, the fact that Mexican TV focuses more on soccer has also affected baseball’s popularity in the past four decades.

Alfredo Harp is a well-known Mexican businessman, partner of the San Diego Padres and owner of Los Diablos Rojos. According to Fernández, he tried to bring back the attention of TV networks, but they prefer soccer, as they can control the air time, while with baseball that’s hard to plan.

Fernández explained that also, during the 80s,  three “outs” made baseball almost lose the entire game against soccer in Mexico.

One was the strike held by baseball players in 1980 in demand of better salaries, while interrupting the series and fragmenting the League. The event generated disappointment from the fans.

The second one was in 1986, when Mexico became again host of the FIFA World Cup, making everyone -media, politicians, promoters and fans- focus on that sport.

And the third one was the ascension of Fernando Valenzuela, also known as “El Toro”, to Major League Baseball as pitcher of the Dodgers. His presence there lead Mexican baseball fans to focus on MLB rather than local baseball.

However, baseball teams in Mexico are working to rebuild the fan base and increase profits.

In the case of “Los Diablos," it’s planning to do so by building great players, then shipping them to Major League Baseball in America.

The team hopes selling its best players will generate a profit. And, that income, could even pay off the operating expenses for the Diablos’s baseball academies.

According to Fernández, Mexico's best young talent learn in their academies about the sport, but also acquire business skills; for instance, English and computing. They also get scholarships for studying high school.

One of the graduates of the Academy already shines as pitcher for the Los Angeles Dodgers: Julio Urias. His recent debut at Dodger Stadium had a Mexican touch, as it featured the brassy trumpets of “El Sinaloense”, the unofficial anthem of his hometown state, Sinaloa.

New stadium on the horizon

And what is the next step for Los Diablos Rojos to keep growing? Build a new stadium.

In the 80’s, the operation started to become complicated and expensive for Los Diablos and Los Tigres, the other local team that ended up moving to the Yucatán Peninsula, at the State of Quintana Roo.

According to fans, the reputation of the park was also severely affected in 1985. That year, Parque Delta was used by Mexican authorities to gather the bodies of those who died in the catastrophic earthquake of September 19.

“The stadium itself suddenly became a humongous morgue, where survivors had to go and identify the corpses of those deceased during the earthquake,” recalls Fernández.

By the end of the 1990’s, the stadium was sold and demolished, and now a shopping center -still called Parque Delta- is there.

Los Diablos had to find a new place to play, and they relocated in an area at the Foro Sol in Mexico City, a popular venue for music festivals and concerts right beside the Autodrome.

But that park did not last too long, as the Autodrome started to expand for Formula 1. In 2014, Los Diablos Rojos were already installed at their current stadium, Fray Nano.

“We are actually facing a big problem: the Foro Sol stadium used to be an enormous stadium for 30,000 people, but now, this temporary stadium, Fray Nano, is a very small stadium for only 4,200 people”, explains Fernández. “Having a smaller stadium, the cost per ticket increased and it impacted the pockets of the fans.”

The state-of-the-art Diablos Rojos stadium planned for 2017 will be bigger and even self-sustaining, using solar cells and water collectors. It will hold up to 24,000 people and will include expandable stands, underground parking and practice fields for the fans. The park will also host the Diablos Rojos Hall of Fame and the National Baseball Historic Archive.

“The team’s entire efforts are already focused in the new park, which will open next year as the best one in Latin America,” Fernández said.

All of this is part of a strategy to make baseball not only popular again in Mexico City, but profitable.