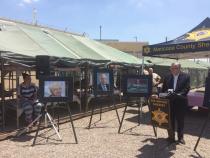 Jude Joffe-Block/KJZZ
Sheriff Joe Arpaio speaks at a press conference with portraits of presidential hopefuls who have visited Tent City.

It has been 23 years since Maricopa County Sheriff Joe Arpaio opened his controversial outdoor jail, Tent City. This election year Arpaio is marking the anniversary by highlighting the support his outdoor jail received from presidential hopefuls in the past.

Arpaio opened Tent City in his first year in office to address jail overcrowding at a low cost. Critics have called the jail inhumane in the summer heat.

But Tent City also has its fans. At a press conference amid the tents on Wednesday, the sheriff’s office displayed the portraits of past Republican presidential hopefuls who once visited the outdoor jail.

Arpaio is in the midst of his own re-election bid this year. He faces three challengers in the Republican primary on August 30, Dan Saban, Marsha Hill and Wayne Baker.

“If this was so bad this concept, why did four presidential candidates visit me in these tents?” Arpaio said. “So far all the critics out there, I am going to say it again, this is an excellent program.”

The sheriff said it was his goal to reach the 25 year anniversary of Tent City.

Arpaio said he counters criticism of the 130 degree tents by pointing out that military men and women are forced to endure the same conditions.

He also unveiled a new neon size on Wednesday that says “23 YRS” that will be displayed under the jail’s trademark “vacancy” sign. The new sign was donated, according to the sheriff’s office.

According to media accounts, former Kansas Sen. Bob Dole visited Tent City in 1996 when he was the Republican presidential candidate.

Sen. John McCain visited the same year, according to the sheriff’s office, though he did not launch his first presidential bid until the 2000 Republican primary. McCain was the 2008 Republican presidential nominee.

Former Texas Sen. Phil Gramm and former California Gov. Pete Wilson also visited Tent City, according to the sheriff’s office. They were both contenders in the 1996 Republican presidential primaries.

Republican candidate Donald Trump was not included in the list of Tent City visitors, though Arpaio has endorsed Trump and stumped for him at the Republican National Convention last month. The sheriff spoke at a rally Trump’s running mate Indiana Governor Mike Pence held in Phoenix on Tuesday evening.

A group of female inmates attended the press conference, after which the sheriff served them cake. Several asked Arpaio to autograph postcards for them.

Tent City currently houses some 1200 inmates but has capacity for 2000, according to the sheriff’s office.

Any day now, a federal judge is expected to decide whether to refer the sheriff for possible criminal contempt charges for violating court orders in a racial profiling case.