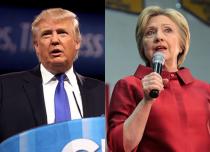 It would seem this current presidential campaign season is ripe with great material for an editorial cartoonist. There’s so much rich material from Donald Trump, in particular.

"If you've ever made a yogurt salad, you mix it in and you put the strawberries, the blueberries, the carrots. You leave it out and it kind of goes gooey," Benson said. "That's the way. You start out with primary colors and then you mix them together into this discombobulation of 'eww goo,' and you've got his hair."

Hillary Clinton can be quite a target, too.

With so many options, how does a cartoonist choose?

And what about all of those angry letters to the editor?

To learn more, we spoke with the Pulitzer Prize-winning cartoonist.