Baseball In Mexico: Louder, Spicier And Fighting For A Home Run 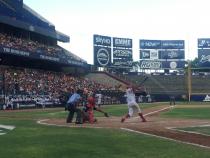 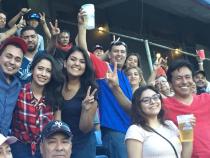 MEXICO CITY — Baseball is known as America’s pastime. From the sandlot to the Major Leagues, kids dream of making it big one day. But while America’s love of the game is undeniable, the passion in Mexico is hot ... although the game is struggling to become profitable.

Soccer might be the number one sport in Mexico, but that's not stopping baseball promoters, team owners and fans in their efforts to start a new era of béisbol mania in Mexico.

Baseball is actually one of the oldest professional sports to be played in Mexico. It has been around since the late 1800s. The origins are imprecise: some records attribute its arrival as a consequence the U.S. invasion in 1847, while others simply consider it a natural influence from American border towns or even Cuba.

Nowadays, Mexican baseball has two national professional leagues, both founded in the early 20th century. The Liga Mexicana de Beisbol, the summer league, has 16 teams, while the Liga Mexicana del Pacífico, the winter league, has eight. While the first holds occasional friendly matches with the teams of the U.S. MLB, the winner of the second league represents Mexico at the Caribbean Series— Latin America’s most important baseball tournament.

Last June in Monterrey, around 20,000 baseball fans from all over the country gathered at the Sultanes’ Stadium to enjoy the 84th edition of the annual Juego de las Estrellas, Mexico’s all-star game of the Liga Mexicana de Beisbol.

Pepe Maiz was there. He is a legendary former baseball player and baseball empresario.

In 1957, as a kid, he accomplished “the perfect game,” winning with the Mexican Junior Baseball Team the Little League World Series in Pennsylvania. Nowadays, he is head of the Council of the Mexican Baseball League and owns a big-scale construction company, as well as the Monterrey Sultanes baseball team, which he's presided over since 1988.

Under his leadership, Sultanes has not only become one of the most prominent teams in Mexico, but the attendance to the games is growing and memorabilia sales are going up.

“When we started, the attendance was just 5,000 fans in the old park. Nowadays, in the new stadium, we have an average of 15,000 fans per game," Maiz said. "We have invested a lot of resources, effort and time, but thank God, baseball is profitable now."

Just this season, the “Sultan Palace,” as Monterrey fans call their stadium, the attendance has been of more than half a million people — a record. And the vast majority of fans — around 80 percent — are young, a target audience with huge potential for the future of baseball in Mexico.

According to Maiz, “There are good things happening to Mexican baseball. The Major League Baseball office that will open in Mexico City will give us a push, and we are already having conversations with them. Definitely yes, there is a new baseball in Mexico.”

Maiz believes that his strategy of giving free tickets to public schools and the elderly has helped attract a bigger audience to the Sultanes Park. His goal, he said, is to have more people filling the seats.

“The most important thing, and the most expensive one for a stadium, is having an empty seat. Having people inside the park guarantees that they will buy sodas, beers, jerseys, food,” Maiz explained.

In Mexican stadiums, hot dogs are replaced with tacos. Cochinita pibil tacos, a kind of spicy pulled pork, is a specialty in the Diablos Rojos Park in Mexico City, while carne asada is popular in northern cities, like Monterrey and Saltillo. There’s also spicy peanuts and cheap beer, often served michelada-style with lime, salsa and salt.

And no matter how excited the fans get in the United States, even with two outs in the bottom of the ninth and the winning run on third base, the crowds in Mexico, chant and cheer all the time, regardless of score.

There is no need for a recording to make people clap or sing, like at the majority of games in the United States. Sure, there are some tunes using the classic organ, like “Take Me Out To The Ball Game” in Spanish (here known as “Vamos todos al parque”). But the crowd tends to improvise, singing and celebrating before, during and after the game, even playing their own instruments. And even while their team is losing.

It's precisely this raucous atmosphere one of the main characteristics of Mexican baseball.

Barry Enright is a former pitcher for the Arizona Diamondbacks and has played since last year with the Tijuana Toros in Mexico. For him, Mexican matches are a must-see experience for baseball fans in the United States.

“It’s more like a party here! Fans are really into it. It’s a little more proper obviously in the States, but the quality of baseball is pretty similar,” he said. “It’s a great atmosphere and a great place to play.”

Alfredo Rivera agrees. He is a fan of Acereros from Monclova, a city located about 125 miles away from the U.S.-Mexico border and the hometown of Kansas City Royals pitcher Joakim Soria.

Rivera thinks that Mexican baseball could be an even better product with the support of American investors and more media coverage.

“Baseball in the U.S. has good salaries, and in Mexico it still needs better promotion in media. Soccer in Mexico eclipses baseball,” said Rivera.

ESPN is currently transmitting some games and some local TV stations give news briefs, but there’s more that needs to be done, according to fans and experts.

Baseball started to lose popularity against soccer in the 1980s. Mexican TV networks started to buy soccer teams while controlling the transmission of the games, which, unlike baseball matches, are easy to program with a specific schedule and length. Also, in 1986 Mexico held the World Cup for the second time, dragging more audience into fútbol.

“There was a big mistake in 1980: Televisa, the biggest TV network in Mexico, tried to buy a baseball team and they weren’t allowed to do so. If that had happened, baseball would be as popular as soccer,” said Mexican Baseball League leader Maiz.

Meanwhile, team owners and promoters in Mexico are working hard to make baseball great again, by innovating in their business strategies, improving their marketing and building or renewing stadiums.