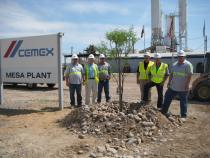 (Photo courtesy of Cemex)
Workers at the Cemex Plant in Mesa collaborate on the company's reforestation initiative.

MEXICO CITY — Cemex is one of the largest cement manufacturers in the world, and its share in the U.S. market helped it build a solid second quarter this year.

Mexico and the United States were their top markets on the past quarter. According to their latest report, Cemex’s earnings before, taxes and interest are subtracted, grew by 6 percent to $771 million, and their quarterly net income increased 81 percent on a year-over-year.

Both are the highest in a second quarter since 2008.

Cemex was benefitted by better pricing and a higher demand of construction materials, mainly cement, which also resulted in strong sales.

In the U.S., Cemex’s income increased 6 percent and generated about $1.036 million of net sales between April and June.

“In the United States, we continued to see healthy demand, pricing traction and margin expansion during the second quarter on a year-over-year basis,” said Fernando González, CEO of Cemex.

The significant growth of single-family construction this year in the U.S. pushed a demand of higher volumes from Cemex, which also brought stronger job creation, low interest rates and high rents.

However, the multifamily segment, which includes residential buildings, still experiences a decline.

“Housing permits for the U.S. are down 1 percent year-to-date June due again to a decline in the multifamily segment," González said. "Permits in three of our four key states—Florida, California and Arizona—continue to expand faster than the country as a whole.”

Another area that has slowed down its construction spending is the industrial and commercial sector.

However, according to Gonzales, the strong dynamics in the U.S. will continue supporting Cemex’s growth for the rest of 2016.

Cemex is a global building materials company established in more than 50 countries and celebrating its 110th anniversary this year.