Should Priests Own Guns? 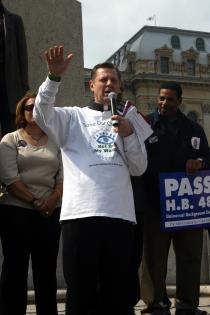 (Courtesy of Saint Sabina)
Father Pfleger at the state capitol in Springfield, Ill., addresses members of St. Sabina Church and other citizens gathered to lobby for legislation requiring Universal Background Checks for gun purchases in Illinois.

A $1 million bond has been set for the man who killed one Phoenix priest and severely beat another. Authorities say 54-year-old Gary Michael Moran tried to burglarize the Mother of Mercy Church rectory last Wednesday.

In the process, authorities said he beat Father Joseph Terra, wrestled the priest’s handgun away, and then used it to murder Father Kenneth Walker.

Is it common for priests to own guns?

In a non-recorded interview, the Diocese of Phoenix spokesperson said the Diocese has no policies on priests owning handguns. Communications Director Robert DeFrancesco said the Diocese believes Catholic clergy are no different from United States citizens who have a constitutional right to carry handguns.

The Archdiocese of Chicago has dealt with the issue of handguns on church property. Father Michael Pfleger is the senior pastor of a church in one of Chicago’s toughest communities.

“I don’t think a priest or a pastor should be in ownership of a gun. I just think it sends a tremendously wrong message. If we’re supposed to be people who preach a gospel of peace of love and of trusting God, is the gun then a just in case God isn’t God,” Pfleger said.

In Atlanta, Archbishop Wilton Gregory banned guns from church institutions, even though Georgia made it legal to carry weapons on church properties.

Here in Phoenix, DeFrancesco said the Diocese is still coping with Walker’s death and diocesan leaders have not discussed the topic of weapons on church grounds.