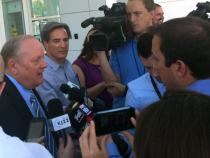 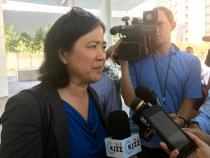 U.S. District Court Judge Murray Snow has threatened for over a year that Arpaio’s contempt case could end in Snow asking a prosecutor to pursue criminal contempt charges.

At Friday’s hearing Snow made comments suggesting his patience with the sheriff and other commanders had run out.

Arpaio flew to Phoenix early Friday morning to attend the 1 p.m. hearing after speaking at the Republican National Convention in Cleveland on Thursday night. His lawyer Mel McDonald told reporters the sheriff's schedule had not allowed him to sleep in a day and a half.

The judge found four members of MCSO in civil contempt of court, including Arpaio and Chief Deputy Jerry Sheridan.

Snow recently issued a new set of orders for the sheriff’s office aimed at correcting problems at the agency that led to the contempt.  Those remedies include an overhaul of the internal affairs division and appointing outside authorities to oversee certain internal investigations and disciplinary matters.

But Snow has yet to decide whether this contempt case could become a possible criminal case.

On Friday, Arpaio’s criminal defense lawyer Mel McDonald tried to convince the judge that the sheriff’s time and resources would be better spent implementing the court’s various orders, rather than defending himself in a criminal trial.

“I think Judge Snow wants what’s best,” McDonald told reporters after court. “And my hope is that I’ve convinced him that the best way to go is to let us and the team we’ve assembled to work with the sheriff to satisfy the objectives he wants to obtain.”

Snow questioned McDonald why he should trust MCSO leadership to make a good faith effort to comply with orders.

Snow suggested he was through putting up with “that kind of stuff.”

Lawyer Lee Stein represents Sheridan and argued to the judge that as a result of the judge’s civil remedies, Sheridan would be investigated internally for untruthfulness. Since Sheridan’s job could be on the line, Stein argued that was a sufficient punishment.

Stein also argued with Snow over whether Sheridan willfully violated court orders, as Snow had found in his May ruling.

Attorneys representing the plaintiffs in the underlying racial profiling case addressed the judge briefly to argue the court had discretion to decide whether to make a criminal contempt referral.

“We have an interest in seeing that the matter is referred for further investigation by the federal authorities,” Wang said.