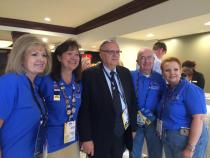 Maricopa County Sheriff Joe Arpaio used Twitter to announce Thursday he would speak at the Republican National Convention in Cleveland that night.

"I think it's an honor to be able to help Donald Trump," Arpaio said in an interview with KJZZ. "I was with him from day one. Whatever I can do to help him, I'm raring to go."

Arpaio's name was not on the original speakers list and there was widespread intrigue about whether the sheriff would be asked to speak. He has introduced Republican presidential nominee Donald Trump at several Arizona events and has campaigned with him outside of Arizona as well.

I will have the honor of speaking tonight around 8 PM EST., shortly before @realDonaldTrump at the @GOPconvention

"We are going to cheer like crazy when Sheriff Joe Arpaio gets on stage tonight," said Diane Anderson, an alternate delegate from Mesa.

Arpaio was elected as a delegate to the Republican National Convention and is one of the most recognized delegates there.

Arpaio is due back in Phoenix on Friday to attend a hearing in his civil contempt of court case.