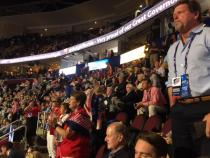 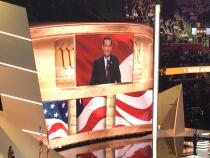 Some Arizona delegates left the Quicken Loans Arena disappointed and angry on Wednesday night after Texas Senator Ted Cruz failed to endorse Republican candidate Donald Trump in his much anticipated speech at the Republican National Convention.

At the start of Cruz’s speech the crowd was intently focused and gave him warm applause, but by the end the audience grew agitated when the Republican runner-up in the primary had not yet endorsed the Republican candidate for president.

Up in the stands of the arena where alternate delegates are seated, there were loud outbursts of “Endorse Trump!,” and “Say his name!” Others simply chanted Trump’s name.

But instead of endorsing Trump by name, Cruz called on voters to not stay home in November.

“Stand and speak and vote your conscience," Cruz said. "Vote for candidates up and down the ticket who you trust to defend our freedom and to be faithful to the Constitution."

When it became clear Cruz was wrapping up his speech without endorsing Trump, the arena erupted in a chorus of boos.

Arizona delegate Loraine Pellegrino said she voted for Cruz in the primary but Wednesday’s speech changed her opinion of him.

“He just does not have my respect anymore,” Pellegrino said while waiting to ride a bus back to her hotel. She said she has come around to supporting Trump, and expected Cruz would do the same.

“I thought it was extremely self-serving, small, petty, inappropriate— I could go into disgraceful, shameful,” Pellegrino said about Cruz’s decision to hold back an endorsement. “I am embarrassed to have given him my one vote. I don’t think he hurt Trump— I think he hurt himself.”

When asked how she would respond if Cruz made another run in the future, Pellegrino said, “He will never have my support.”

Alternate delegate Eric Morgan also backed Cruz in the primary and had hoped his first choice candidate’s speech would help unify the party in the interest of getting a Republican in the White House.

He also left the arena disappointed.

Morgan said he feared Cruz’s decision to not endorse Trump would make it harder for Republicans to get out the vote in November.

Editor's Note: The headline of this story has been changed to reflect that not all members of Arizona's delegation were angered by Cruz's speech.