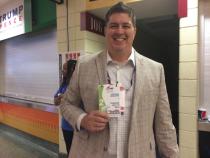 Arizona’s delegates to the Republican National Convention helped officially nominate Donald Trump as the Republican candidate for president with all 58 of the state’s votes on Tuesday.

Before the vote there had been whispers that some members of the Arizona delegation who do not support Trump might try to abstain or do something disruptive.

“I’m reporting and happy to announce from the hottest state in the country for job growth, Arizona delivers 58 bound votes to the nominee Donald J. Trump, the next president of the United States of America,” Graham said as the arena cheered.

Graham later told KJZZ the Arizona delegation is an example of how Republicans around the country can put aside differences from the primary and unify around Trump.

“I was amazed by the professionalism and the commitment of our delegation,” Graham said in an interview. “If you noticed, we didn’t have any dissenting votes, nobody really stood up and tried to make a point. There are people that maybe have other favorites, but they respected the law of Arizona and they also respected the state convention laws.”

Delegate Frank Antenori, a former state senator who now lives in Cochise, said it was thrilling to be on the floor with his fellow delegates when Graham announced Arizona was sending 58 votes to Trump.

“They all started jumping and screaming and it was really exciting,” said Antenori, who has backed Trump for most of the primary.

But for delegates who never favored Trump, there was worry that the party was in danger of becoming more divided, in part because of convention procedures they felt were unfair.

“The delegates are completely ignored the entire convention,” said Jarrod White, an Arizona delegate who is affiliated with groups that attempted but failed to unbind delegates this convention. But White said his complaints went beyond that particular polarizing issue.

On Tuesday, White was still angered by events at the convention the previous day that he believes unfolded in an undemocratic manner

White was part of a faction that wanted delegates to vote on the rules package with a roll call vote, rather than a voice vote, in order to ensure each delegate’s preference would be taken into account.

The rules package passed on a voice vote, but even though only delegates were supposed to vote, alternate delegates and guests in the arena also weighed in by screaming along with either the “yea” or “nay” factions.

White was disappointed in what he called a process lacking in transparency. Then, when each state delivered its votes for the nomination on Tuesday, White was frustrated that as a delegate, he was not able to formally voice his preference for a candidate or have the opportunity to abstain.

Instead, Arizona’s 58 votes for Trump were automatic.

That's because under state law, in the first round of voting, delegates must honor the choice of whoever Arizona voters picked during the state’s presidential preference election.

EDITOR'S NOTE: An Arizona delegate's name has been updated to relfect the correct spelling, Jarrod White.