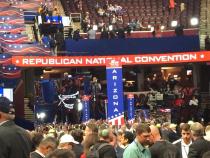 The second day of the Republican National Convention figures to be less dramatic than the first – when some delegates during the afternoon session noisily called for a roll call vote on the convention’s rules; that request was denied.

KJZZ’s Jude Joffe-Block is in Cleveland for the RNC convention and updates The Show with the latest from Arizona delegates and attendees.

One of Arizona's delegates is Republican political consultant Constantin Querard.  He was a Ted Cruz supporter, but will vote now for Donald Trump. He said Monday's drama could trickle down to party politics in Arizona.

"It feeds a distrust between the grassroots and the establishment folks that run the RNC," Querard said. "That's corrosive over the long term for a party."