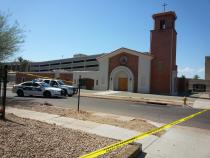 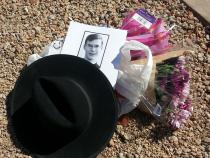 Nadine Arroyo Rodriguez - KJZZ News
Parishioners mourned the attacks Thursday morning.
One priest was shot and killed and another was injured in an attack at a Catholic church in downtown Phoenix, police said.
Police received a call about a burglary at the Mother of Mercy Mission near the state Capitol shortly after 9 p.m. Wednesday, Sgt. Steve Martos said. Responding  officers found two priests badly injured. One of the priests had been shot and died at the hospital, Martos said. The  other priest was physically assaulted and is hospitalized in critical condition with unspecified injuries, he  said.
The injured 56-year-old priest was able to call 911 and direct authorities to the church, Martos said.
“This was a very tragic and an appalling criminal violation—the death of Fr. Kenneth Walker,” Phoenix Police Chief Daniel Garcia, who spoke at a press conference Thursday.
The Roman Catholic Diocese of Phoenix on Thursday identified the injured priest as the Rev. Joseph Terra.
Investigators are still trying to determine if robbery was a motive, he said. Police are also unsure how many attackers were involved.
As police investigated the crime scene at the church, about a dozen parishioners gathered across the street, kneeling on the sidewalk and saying the  Lord's Prayer in response to the loss of their beloved clergyman. A bouquet of  flowers and pictures of the dead priest lay on the sidewalk.
“It’s painful because I know what a good [priest] we’ve lost especially in Father Walker," said parishoner Raymond Spiotta. "And Fr. Terra is just an amazing leader, very devoted to us.”
Terra and Walker served as pastor and assistant pastor, respectively, according to the church website. They both belonged to the Priestly Fraternity of St.  Peter. Church officials say Walker was 29 years old,  and they asked for prayers for his family, as well as for ``the health and complete recovery'' of Terra.

"They’ve been there four years and have felt that a safe place to live," Adamson said. "Fr. Terra is a pretty strong man and he’s not afraid of anybody.  And he would, if someone came and asked him for something, he would give him is shirt off his back. That’s the type of priest he is. A real servant of God.”

Police found a car they were seeking in connection with the attack, Martos said. The car was empty when it was located about four blocks north of the  church.
The church is located along a gritty stretch of road near the state Capitol in downtown Phoenix with a large homeless population.
Rorate Caeli, an online blog widely read in Vatican circles, said Walker was born in upstate New York near Poughkeepsie. He was the middle child among a family of 11 kids. He was ordained in May 2012.