Why Are Fine Arts Funding Shortfalls Familiar For Arizona? 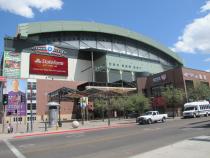 Arizona Theatre Company’s financial struggles recently became very public, as the company is getting closer to the date later this week when it may have to make the decision to cancel its upcoming season. Funding shortfalls aren’t a new thing for arts organizations in Arizona—or other states, for that matter.

But is it more difficult to get support here?

To learn more, we spoke with Tom Sadler, president and CEO of the Arizona Sports and Tourism Authority; Rusty Foley, executive director of Arizona Citizens for the Arts; and longtime Valley sportscaster Brad Cesmat, CEO of Sports360AZ.com.