Latinos Could Make Arizona A Battleground, But Only If Their Turnout Surges 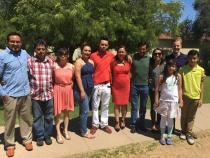 (Courtesy of Aldo Gonzalez)
The Gonzalezes with their extended family.
(Photo by Jude Joffe-Block-KJZZ)
Members of the Gonzalez family talked about the upcoming election in the family kitchen on a recent Sunday.

On a recent Sunday morning in Mesa, several members of the Gonzalez family settled in around the kitchen table with ice water to talk about the upcoming election.

Eldest son Aldo, who is 29, said the family didn’t used to talk politics.

“We just didn’t know why we should vote, why we should either vote for a Republican or Democrat, or what even like the parties stood for,” Aldo said.

Most of the family now identify as independents.

Aldo is the most political. He is an advocate for immigration reform and for work he helps immigrants naturalize. He and his two younger siblings grew up in Mesa, but the whole family was born in Mexico.

His father Nemecio came to the U.S. first, in the late 80s. Nemecio is 50 and works in landscaping now. He started out as as an undocumented farmworker.

“I spent several years like that until I had a chance to apply for papers through a farmworker program,” Nemecio said in Spanish. “In 1999, I became a citizen.”

The rest of the Gonzalez family also naturalized and they are part of the growing Latino electorate in red Maricopa County, which is the state’s most populous. There are some half a million Latinos in Maricopa County eligible to vote this election, according to the latest estimates from U.S. Census data. That number has jumped 23 percent since the previous estimate gathered between 2005 and 2009.

The last time Arizona voted for a Democratic presidential candidate was in 1996 when Bill Clinton prevailed in a three-way race. It has been much longer since Maricopa County went blue, in 1948 for Harry S. Truman.

Arizona’s older white population tends to be politically conservative and Donald Trump is counting on their support.

In 2012, 66 percent of white voters in Arizona supported Mitt Romney, while 74 percent of Latino voters supported Barack Obama, according to exit polls.

As the number of Latino eligible voters grows, the share of the eligible electorate that is white is slowly beginning to decline.

That trend is destined to become more pronounced in the coming years since youth in the state are minority majority, while the aging population is majority white. Arizona has the largest age-race divide in the country, according to demographer William Frey of the Brookings Institution.

Arizona is known for its hard-line policies on immigration, and for years political analysts have wondered if Arizona Latinos would punish the Republicans in power with a backlash.

So far, not so much.

While Latinos here tend to favor Democrats, they turn out at much lower rates than the general electorate. For example in the 2012 election, estimates from U.S. Census data show the number of eligible Latinos who voted in Arizona was just 40 percent compared to 62 percent of eligible whites. An analysis by Frey found the turnout rate was even higher for whites over the age of 65, at 77 percent.

Some believe this year Latino turnout could be different.

At his job, Aldo has seen a surge of immigrants trying to become citizens in time to vote in November.

“And that is because they want to vote against Trump and against Arpaio,” Aldo said.

He is referring to Maricopa County Sheriff Joe Arpaio, who is known for his tough immigration enforcement policies and is seeking a seventh term. Arpaio has been facing troubles in federal court after a judge ruled his tactics discriminated against Latinos and found the sheriff in civil contempt of court for violating court orders.

The Gonzalez family is eager to vote against the incumbent sheriff. For president, most of the family backed Bernie Sanders in the primary. Now, the parents support Hillary Clinton.

Nemecio cast his first presidential ballot in 2000 for George W. Bush. He did so because he was able to get his papers under the candidate's father, George H.W. Bush. But he has mostly favored Democrats since then. This year he was surprised to see Trump become the presumptive Republican nominee.

“If my relatives who don’t have papers are fearful now — it will be more sadness, we will be waiting for bad news all the time if Trump wins,” Nemecio said.

One undocumented relative they worry about was also seated at the table. Nemecio’s sister-in-law Minerva. We are not using her last name because of her status.

Minerva said she has a lot to lose if Trump wins, and a lot to gain under Clinton, who supports a pathway to citizenship for immigrants like her. She said this campaign season is a mix of fear and hope.

“Fear we will be separated from our kids, and hope that we can get papers in the future,” Minerva said.

Minerva has three U.S. citizen children and would have qualified for the Obama administration’s program to grant work permits to certain undocumented parents. Her hopes were dashed last month after a U.S. Supreme Court ruling kept the program on hold.

Still she takes comfort in the fact one member of her immediate family will vote this year. Her 20-year-old American-born son is eligible to vote for president for the first time.

“It’s just one vote, but one vote can help beat the candidate we don't want,” Minerva said.

These high stakes on immigration could motivate more Latinos to participate and put Arizona in reach for Democrats for the first time in 20 years.

There are an estimated 300,000 Latinos here eligible to vote, but not registered — that alone is more votes than Mitt Romney’s margin of victory in 2012.

Frey of the Brookings Institution estimates if Arizona’s minority population continues to grow, continues to vote Democratic in the same proportions as 2012, but also turns out to vote at the same rate as white voters — the state would turn blue in 2028. Frey said if an even higher portion of these minority voters begin to support Democrats, the switch could happen sooner.

Some here are disillusioned with both major parties, including Aldo.

“I don’t think that I would be able to support Hillary,” Aldo said. “Because I see her as part of a problem. She is part of this system that is very corrupt.”

He said he could not trust Clinton was for the people “and not all this money that has been given into her campaign.”

He plans to write in Bernie Sanders or support the Green Party's Jill Stein. Though the Green Party originally missed a key Arizona deadline to appear on the ballot, Secretary of State Michele Reagan asked a judge on Tuesday to allow her office to put Stein's name on the ballot.

Aldo said he is angry the Obama administration deported millions and broke a promise to pass immigration reform legislation. He wants to send a message to the Democratic Party that it cannot take the Latino vote for granted after failing to deliver on immigration.

“We keep being used as a political football,” Aldo said. “We can’t keep waiting.”