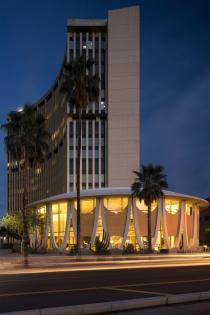 (Photo courtesy Nic Lehoux)
The Phoenix Financial Center. The design team reintroduced W. A. Sarmiento’s vision of the shade screens on the South Rotunda, which now provides relief for the staff from the harsh afternoon sun.

The Postwar Architecture Task Force of Greater Phoenix has compiled a new list of the top 25 mid-century buildings that are eligible for protection but do not have it.

To qualify, buildings have to still be standing and not have been altered too far, they had to have been in the Mid-Century Marvels book, they have to be eligible for the National Register of Historic Places and, in the eyes of the task force, they have to be missed if they were gone.

The 25 include banks, offices, a dry cleaner and a bowling alley. Alison King with modernphoenix.net is a member of the task force. KJZZ's Mark Brodie met her at one of the buildings on the list, the Phoenix Financial Center, in what is now the offices of the design firm Shepley Bulfinch, and asked her about the list.

"Part of the reason we made the top 25 list was to bring attention to the property owners and to let them know that we Phoenicians really love the city that we live in and we love the design and that it's really worth preserving," King said.

Post-Recession years are bringing rapid development, which has the potential to endanger the area's iconic buildings, King said. For those who say Phoenix lacks true historic buildings, she said there's a saying in the preservation community.

The list got us thinking – why are we so fascinated by this time in history? Is it just all about a certain TV show?

To find out if the mid-century modern craze is more than just Mad Men related, The Show spoke with Amanda Dameron, editor-in-chief of Dwell magazine. She said the appeal is a mix of the time's aesthetic and mindset.

"That era in our history was a time of great optimism and I think that is always a comforting place to return to," Dameron said.