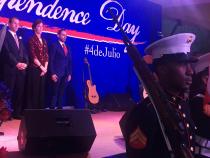 (Photo by Rodrigo Cervantes- KJZZ)
The U.S. Embassy in Mexico celebrated the 4th of July Tuesday at the residence of the new ambassador, Roberta Jacobson, in Mexico City. 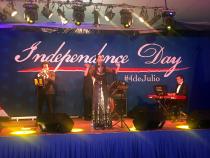 (Photo by Rodrigo Cervantes- KJZZ)
Singer Lila Downs inaugurated the reception with a medley of the Mexican and American anthems.

MEXICO CITY- On Tuesday, the American Embassy in Mexico celebrated the 4th of July and introduced Roberta Jacobson as the new head of the diplomatic office.

Her ratification by the U.S. Congress faced months of delay, after two Republican Senators questioned her leading role in the normalization of the relationships with Cuba.

As the official leader of the American Embassy in Mexico, Jacobson delivered her first public speech at her residence in the upscale neighborhood of Las Lomas, in Mexico City, highlighting the strong bonds between both countries.

“If someone in the United States thinks of Mexico as ‘them against us’, then that person does not know both countries really well,” said Jacobson.

According to the diplomat, 10 percent of the American population have family ties with Mexico, more than a million Americans live in Mexico and more than 40 million people from both countries travel between them annually.

The Ambassador considered this is a historical moment for both nations socially, politically and economically speaking, as bilateral trade between them represents about $1.6 billion on a daily basis.

“That is about $10 million that are being generated while I deliver this speech and, unfortunately, I don’t get a single penny from that,” said Jacobson, making the attendance laugh.

Americans should not ignore the commercial importance of Mexico, Jacobson said,  since the U.S. sells more to its neighboring nation than to Russia, Brazil, India and China all together.

She also invited the guests of the reception, predominantly Mexican politicians and business leaders, to contribute on the growth of the economies, to collaborate on both nation’s fight against climate change, and to support the increase of student and academic exchange.

Singer Lila Downs inaugurated the reception with a medley of the Mexican and American anthems.