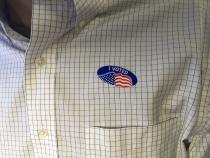 The Libertarian party in Arizona has had a loyal number of members for many years, but election wins haven’t happened. Though that isn’t expected to change this fall, the party at the national level is getting a growing amount of positive attention. The presidential ticket featuring former Governors Gary Johnson and William Weld is being called a potential spoiler by some analysts.

To learn more about libertarians, we spoke with Matt Zwolinski, professor of philosophy and co-director of the Institute for Law and Philosophy at the University of San Diego.

What does a Libertarian believe?

"Libertarians believe in minimizing the size and scope of government and maximizing individuals' freedom to live their own lives as they see fit, both economically and socially. Libertarians think most of what the government does would be better done on a private voluntary basis or perhaps not done at all. For instance, the government should get out of the war on drugs, get out of the war in Iraq, get out of the business of propping up banks and other large corporations and allow free people to solve problems on their own through the free market and through voluntary cooperation."

"Nobody's really raised Libertarian. You're sort of raised in one of the two major parties and discover it and for the most part, people are coming from the Republican party, but you're getting more and more people who self-identify as progressives who are coming into libertarianism and seeing something there that is appealing to them."

Why hasn't a Libertarian candidate grabbed the public's attention?

"I'd say the closest you got to something like that happening was the Ron Paul phenomenon a few years back. So Ron Paul ran for president a few times and didn't do all that well in the election of course, but nobody really expected that he would. What's significant about the Paul phenomenon, and I think what's significant about the Sanders phenomenon is the kind of movement that he built in his wake. Paul attracted a lot of young people to libertarianism."