Cassette-Tape Comeback: Past Tech Is The Future For Mexican Record Label Cintas 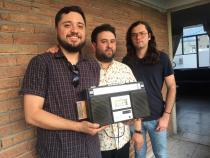 MONTERREY, MEXICO — Digital music and streaming keep growing, but some music lovers still bet on old-school, analog formats. Such is the case of a Mexican company that wants to bring cassettes back.

A year ago, a group of friends wanted to try something different to connect new bands with their fans. What they created was a new company with an old idea: cassette tapes.

The label is called Cintas — tapes in Spanish — and is based in Monterrey, Mexico.  It started copying 20 cassettes for Pura Crema, a local indie rock band with songs such as “Ya mero caes.” In fact, one of the founders of Cintas plays in the group.

Since then, Cintas has recorded 18 bands, most of them from Mexico, and has produced over 1,000 tapes.

Cintas uses tapes imported from factories in the United States and Canada and the artwork and recording are made in Mexico. One of their policies is to give absolute creative freedom to the artists.

Ernesto Vidal, founder of the company, explained that Cintas is part of the growing scene of independent artists and labels in Mexico, and they are producing music with inexpensive supplies.

“The thing with cassettes is that it’s a very low-cost format, and for us being in Mexico, we were like, ‘Well, we can’t really do vinyl, because vinyl is very expensive.'”

For Oscar Aguirre, one of his partners, the comeback of the cassette is a worldwide phenomenon that is gaining popularity, even though it competes with other formats.

“It’s not profitable right now, but we hope so in the future,” Aguirre said while he laughed. “But we do it more for supporting the bands and, as they grow, we also grow with them.”

Cintas itself is a project funded with the savings of its founders, and it took a year to finally get some returns of investment.

The Mexican company is trying to corner a slice of a nostalgia market that is actually growing. The National Audio Company, one of the largest manufacturers of audio cassettes in the United States, produced more than 10 million tapes in 2014 and sales are up 20 percent every year.

Right now, Cintas is looking for indie bands in Mexico and the U.S. to record, as well as for stores in both countries to sell their tapes.