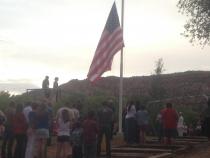 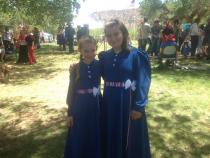 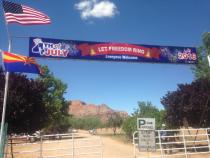 (Photo by Sarah Ventre-KJZZ)
The sign at the gates of Cottonwood Park in Colorado City, indicating the celebration is for everyone, regardless of your affiliation with the community.

Thousands of community members gathered for a Fourth of July celebration in Colorado City, Arizona on Saturday. The town lies on the Utah-Arizona border, and is home to the polygamous sect the Fundamentalist Church of Jesus Christ of Latter Day Saints (FLDS).

A federal jury determined in March that the town discriminated against non-FLDS members.

Simply holding a Fourth of July celebration in Colorado City is a big deal. Some community members said these types of patriotic celebrations were banned under FLDS leader Warren Jeffs, who is now in prison for two counts of sexual assault of a child.

It wasn’t FLDS church members in attendance this weekend, though. Instead, it was many people who had left or been kicked out of the church, or who have some family ties to the area.

"It’s not about religion," said George Jessop, founder of the event which is in its second year. "It’s about love and friendship. And it’s about community. It’s about rebuilding our lives."

The event drew people from all over the area, as well as some who traveled from out of state. While many people think of the town of Colorado City as synonymous with modest clothes and prairie dresses, many attendees this weekend (including women) wore jeans or shorts, and in some cases people in very modern clothes were side by side others who were in long-sleeved, ankle-length dresses.

These types of interactions can be seen as symbolic, and representative of bigger changes as the community of non-FLDS members in the area opens up and becomes more welcoming and inclusive.

"They have to have the freedom to be themselves," said Dan Barlow, one of the founders of Colorado City, and its first mayor. "Under the program that was here, people were too confined. They couldn’t feel that."

When Barlow said, "the program that was here," he was referring to the FLDS church under the leadership of Warren Jeffs, and prior to that his father Rulon Jeffs. The Jeffs family was known for imposing strict rules on those in the community, and for expelling members regularly. Barlow himself was kicked out of the FLDS church in 2004, and now lives in St. George with his son, though he hopes to move back to Colorado City.

"It took something like 20 years almost for us to get in the condition we’re in," said Barlow. "It may take 15 or 20 years before we’ve changed this thing back."

There was also a sense of family reunion at the event. It was very common to overhear people who hadn't seen each other in years reconnecting. Since the community is so tight knit and people have such strong ties to the area, when someone introduced them self they would ask for your last name so they could identify your family and how you were connected to others there.

Those running the event, like George Jessop, made a point of saying this was not a day about differences, but rather a time for the community to celebrate what they have in common. For many, that means simply being able to get together with family and friends regardless of their faith or lack of it.

"People have done such derogatory and unkind things to each other that it’s been very challenging for people to accept each other back," said Jessop. "And so this has been an amazing healing process for people because they’ve been able to come back together."