Arizona Marijuana Advocates: 250K Signatures Will Get Legalization On Ballot 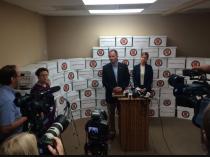 (Photo by Casey Kuhn - KJZZ)
Supporters of legalized recreational marijuana in Arizona stand in front of boxes symbolizing the signatures they received.

Advocates of putting recreational marijuana on the Arizona ballot this November announced Thursday they met and exceeded signature requirements.

The group Regulate Marijuana Like Alcohol presented boxes of what they say are more than 250,000 signatures to be verified by the Secretary of State.

That’s 100,000 more than required to get the measure on the ballot.

The group’s chairman J.P. Holyoak said they project legal weed would bring millions of dollars to the state, and most would go to Arizona’s schools.

“[We want to focus on] our message to the public of ending the failed policies of prohibition and using that money to fund our schools rather than sending it to criminal drug dealers and cartels,” Holyoak said.

The measure would temporarily limit the number of places the drug could be sold legally statewide to about 150 in the entire state.

The proposal also includes language that says individuals who test positive for actual "components of marijuana'' cannot be penalized for that reason alone. The components would include the psychoactive element of the drug.

Attorney Ryan Hurley who represents the Campaign to Regulate Marijuana Like Alcohol said this would not permit drugged driving. He pointed out that the measure also says the law would not immunize someone from being charged with operating a motor vehicle "while impaired by marijuana or a marijuana product.''

Hurley said there is nothing in the proposal to define what level of marijuana makes someone "impaired.'' He said the legislature could enact a specific standard at which someone is presumed impaired as it did with alcohol.

Maricopa County Attorney Bill Montgomery, a foe of legalized recreational marijuana, said he's not sure the language of the ballot measure would allow that. And even if lawmakers would approve a presumptive limit, the actual number could be challenged by supporters of marijuana use as arbitrary.