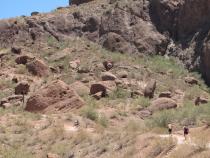 The Valley hit record highs this weekend, with temperatures hovering around 118 degrees on Sunday. The extreme heat resulted in the deaths of at least two people in the Phoenix area. Both individuals were in their 20s, and both were doing outdoor activities, like hiking or biking, in area mountain parks.

On Sunday, City of Phoenix Park Ranger Chris Webb was posted at the Echo Canyon trail head at Camelback Mountain— one of the most popular hiking trails in Phoenix. She checked in with hikers before they started up the trail.

"We want to make sure that everybody understands that this is going to be just about as hot as Phoenix has ever been," Webb said. She cautioned hikers to make sure they had enough water with them, but emphasized that it still might not be enough to prevent heat-related problems.

"The sun is unrelenting," said Webb. "And it is very hard for you to prepare no matter how much water that you drink."

Some hikers chose to go out despite the warnings. Like Bob Hobaica who said he likes coming to the mountain when there are fewer people there. "It’s just crowded in the mornings, crowded in the evenings," said Hobaica. "I’m a native, so I look for the signs if there’s heat exhaustion. [I've] been doing this for a very long time."

Dillon Winiecki is a firefighter for the Phoenix Fire Department. He said he and his co-workers have to make sure they are prepared too. "We’ll go out in the sun and we’ll do drills and we’ll do training and exercises that help us get used to that heat," said Winiecki.

Temperatures are expected to hover around 117 degrees on Monday, and an excessive heat warning remains in effect until Wednesday night.