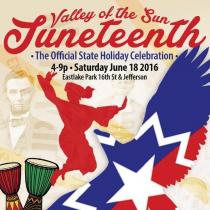 Arizona will observe Juneteenth this Saturday, June 18. In March, the Arizona legislature passed a bill recognizing Juneteenth as a state holiday. It was first celebrated in 1865 in Texas.

State Rep. Reginald Bolding, who pushed the legislation, said Juneteenth commemorates the ending of slavery in the United States and will bring together communities across Arizona.

“We can celebrate each other's differences, but we also can celebrate progress that we’ve made throughout this country and the celebration of Juneteenth as a state holiday here in Arizona is something that we should all recognize and be excited about,” Bolding said.

Though the official date of the holiday is June 19, Bolding said this year’s celebration will take place at 4 p.m. at Eastlake Park in Phoenix on Saturday. Arizona is the 46th state to declare Juneteenth a holiday. It is not a paid state holiday.