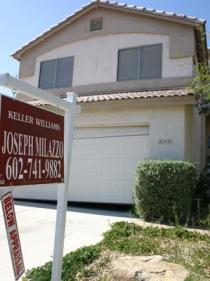 Overall foreclosure activity is up 20 percent compared to this time in Arizona last year, according to real estate information company RealtyTrac. But one analyst is not yet waving a red flag.

What stands out among RealtyTrac’s data is the increase in foreclosure starts, meaning the beginning of the foreclosure process. Senior Vice President Daren Blomquist said 19 percent of Arizona loans in foreclosure originated in the last two years.

“The good news is that Arizona is not dealing with these lingering, legacy bad loans that were originated ten years ago that are still lingering in foreclosure," he said. "Maybe on the bad side though is that it shows the loans from recent years are showing a little bit of weakness.”

Blomquist doesn’t think the foreclosures are due to risky loans like a decade ago, but more with individual homeowners’ situations. Foreclosure activity will never disappear he said, but if rates continue to rise over the next six to 12 months it could indicate bigger, underlying issues.

You can find details for more than 200 metropolitan areas at RealtyTrac's county heat map here.